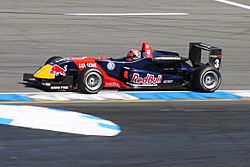 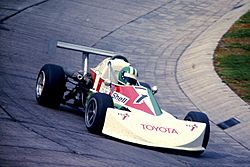 Rudolf Dötsch in a March-Toyota at the Nürburgring 1976

Formula Three, also called Formula 3 or F3, is a class of open-wheel formula racing. The various championships held in Europe, Australia, South America and Asia form an important step for many prospective Formula One drivers.

All content from Kiddle encyclopedia articles (including the article images and facts) can be freely used under Attribution-ShareAlike license, unless stated otherwise. Cite this article:
Formula 3 Facts for Kids. Kiddle Encyclopedia.