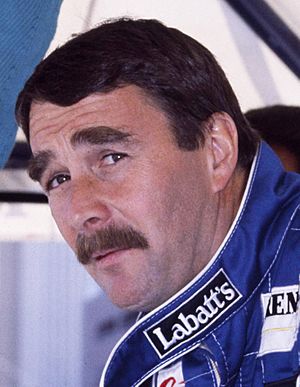 Nigel Ernest James Mansell OBE (born August 8, 1953 in Upton-upon-Severn, Worcestershire) is a British racing driver from England who won both the Formula One World Championship (1992) and CART World Series (1993). He is the only person in history to hold both titles simultaneously, and was the first person to win the CART title in his debut season. During the early nineties, Mansell was commonly known, by the British media especially, as Our Nige.

His career in Formula One spanned 15 seasons, with his final two full seasons of top-level racing being spent in the CART series. Mansell remains the most successful British Formula One driver of all-time in terms of race wins with 31 victories, and is fourth overall on the Formula One race winners list behind Michael Schumacher, Alain Prost, and Ayrton Senna. He was rated in the top 10 Formula One drivers of all time by Murray Walker, who was a Formula One commentator for 50 years. In 2008, American sports television network ESPN ranked him 24th on their top drivers of all-time.

Mansell raced in the GP Masters series and signed a one-off race deal for the Scuderia Ecosse GT race team to drive their number 63 Ferrari430 GT2 car at Silverstone on 6 May 2007.

All content from Kiddle encyclopedia articles (including the article images and facts) can be freely used under Attribution-ShareAlike license, unless stated otherwise. Cite this article:
Nigel Mansell Facts for Kids. Kiddle Encyclopedia.