Total S.A. is a French multinational integrated oil and gas company and one of the seven "Supermajor" oil companies in the world. Its businesses cover the entire oil and gas chain, from crude oil and natural gas exploration and production to power generation, transportation, refining, petroleum product marketing, and international crude oil and product trading.

Total is also a large scale chemicals manufacturer. Total is a major player in low-carbon energies.

Total has its head office in the Tour Total in La Défense district in Courbevoie, west of Paris. The company is a component of the Euro Stoxx 50 stock market index.

Elf Aquitaine was a French oil company. They merged with TotalFina to form TotalFinaElf. The new company changed its name to Total in 2003. The name Elf has been kept as a brand of Total.

On April 28, 1967 the company's different brand names and products were combined under the Elf brand. Elf stood for Essence Lubricants France. In 1976 Elf-ERAP merged with Antar Pétroles de l'Atlantique and became Société Nationale Elf Aquitaine (SNEA). Later it became known as Elf Aquitaine. Elf Aquitaine was listed on the NYSE in 1991. In 2000 Elf Aquitaine merged with Total Fina to form TotalFinaElf. In 2003, the name was changed to Total. 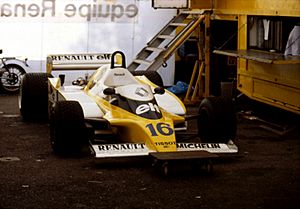 From its beginnings, Elf used motor racing as a means of promotion. It had four-year deal with Matra starting in the French Formula 3 series. In 1969 the combination won the Formula One World Championship with Tyrrell and Jackie Stewart. By this time, Elf was owned by the French government. They began a new long-term relationship with Renault, which was also owned by the French government at the time. The Renault F1 racing cars carried Elf sponsorship until 2009. The Elf logos were replaced with Total logos.

All content from Kiddle encyclopedia articles (including the article images and facts) can be freely used under Attribution-ShareAlike license, unless stated otherwise. Cite this article:
Elf Aquitaine Facts for Kids. Kiddle Encyclopedia.