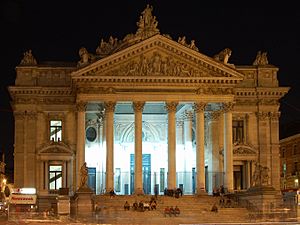 Euronext is a stock exchange in Europe. It has buildings in Belgium, France, Netherlands, Portugal and the United Kingdom.

Euronext was created on September 22 2000, when the stock exchanges of Amsterdam, Brussels Stock Exchange and Paris Bourse were joined together in a merger. In recent years, Euronext has become the fifth largest stock exchange on the planet.

All content from Kiddle encyclopedia articles (including the article images and facts) can be freely used under Attribution-ShareAlike license, unless stated otherwise. Cite this article:
Euronext Facts for Kids. Kiddle Encyclopedia.