Belmont is a village at the southern end of the town of Sutton in the southwest London Borough of Sutton, England. It is located off the A217 road and near to Banstead Downs in Surrey. It is a suburban development situated 10.8 miles (17.4 km) south-southwest of Charing Cross. 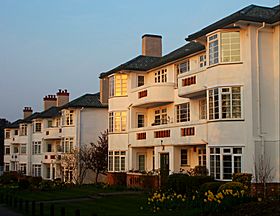 Belmont did not exist until the late 19th-century. Belmont railway station opened in May 1865 and was originally called 'California Station', named after the California Arms public house on the opposite side of Brighton Road which was built by John Gibbons in approximately 1858. The station was renamed 'Belmont' in 1875, and the name was attached to the village that emerged subsequently. The original pub was heavily damaged by German bombing in the Second World War. The new building, built on the site in 1955, was known as 'The Belmont', but in 2014, under new management, reverted to its original name of 'The California'. St. John's Church (C of E) stands in Queens Road, near the end of the small High Street ("Station Road").

Banstead Hospital and the emergence of Belmont

The village of Belmont strongly owed its development to the presence of Banstead Asylum. Although located in the parish of Banstead, the asylum was much closer to the village and railway station of Belmont than those of Banstead. Originally known as Banstead Asylum, the hospital opened in 1877 as the third county lunatic asylum for Middlesex. Around 1890 it came under the auspices of London County Council. Later a psychiatric hospital under the name Banstead Mental Hospital, then Banstead Hospital, it closed in 1986 and was largely demolished in 1989. The site is now occupied by the prison High Down.

Belmont Hospital was a psychiatric hospital. It closed and was demolished in the 1980s. The site is now occupied by the 'Belmont Heights' housing development, which is situated to the west of Brighton Road, to the north of Belmont village. Belmont Hospital opened after the Second World War. The premises had previously fulfilled a number of different institutional purposes. For example, during World War II it was used as an emergency hospital for military and civilian casualties, including psychiatric cases. The oldest buildings on the site, built in the early 1850s, had originally been a large Poor Law residential 'district' school belonging to the South Metropolitan Schools District. This institution catered for pauper children from several parishes in south-east London. Along with its nearby annex site, built in 1884 in Cotswold Road (formerly Banstead Road), this establishment closed in 1902. The premises at both sites were then acquired by the Metropolitan Asylums Board. Some of the buildings of the Cotswold Road site still exist. 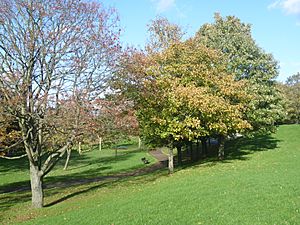 Just to the south of the village is Banstead Downs, which extends for around a mile further south towards neighbouring Banstead, Surrey. Banstead Downs is a large Site of Special Scientific Interest, covering 430 acres (170 ha). Banstead Golf Course is on the northern slopes. 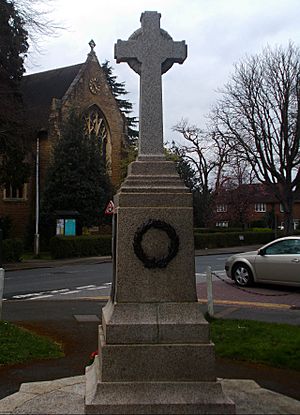 Belmont railway station is on the Sutton to Epsom Downs branchline and the London Victoria to Epsom Downs line. It is part of the Sutton & Mole Valley Line services of the Southern rail operating company, and is in London Travelcard Zone 5.

All content from Kiddle encyclopedia articles (including the article images and facts) can be freely used under Attribution-ShareAlike license, unless stated otherwise. Cite this article:
Belmont, Sutton Facts for Kids. Kiddle Encyclopedia.