Cheam is a large suburban village in the London Borough of Sutton, England, at the southern boundary of Greater London where it meets Surrey. It is divided into two main areas, North Cheam and Cheam Village, both of which are centred on retail districts.

Cheam has a number of listed buildings, including Lumley Chapel and the 16th-century Whitehall Gallery, and is adjacent to two large adjoining parks, Nonsuch Park and Cheam Park. Nonsuch Park contains the listed Nonsuch Mansion. Parts of Cheam Park and Cheam Village are in a conservation area.

Cheam is bordered by Worcester Park to the north-west, Morden to the north-east, Sutton to the east, Ewell to the west and Banstead and Belmont to the south.

The Roman road of Stane Street forms part of the boundary of Cheam. The course of Stane Street through the area is now followed by the modern road London Road at North Cheam, and designated A24 on road maps.

The village lay within the Anglo-Saxon administrative division of Wallington hundred.

Cheam's roots date back to 1018, when Chertsey Abbey owned the area. In the Domesday Book, the Bishop was holding Cheam to cater for the monks.

Cheam appears in Domesday Book as Ceiham. It was held by Archbishop Lanfranc of Canterbury. Its Domesday assets were: 4 hides; 1 church, 17 ploughs, 1-acre (4,000 m2) of meadow, woodland worth 25 hogs. It rendered £14.

In the Middle Ages, Cheam had potteries, and recent excavations have been carried out by archaeologists. In 1538, part of Cheam was handed over to Henry VIII. The same year, Henry began work on Nonsuch Palace, which he decorated elaborately. This was later sold and demolished. In 1801, the time of the first census, Cheam had a population of 616 Cheamonians.

In 1259 Henry III of England made Cheam a town by charter. Records of Cheam Charter Fair date back to the 1800s when a fairground accompanied the market.

Cheam was the original home of Cheam School which was formed in Whitehall in 1645 and later occupied Tabor Court from 1719 until 1934 when the school moved to Berkshire. Prince Philip attended the school in Cheam in the years immediately preceding its move. 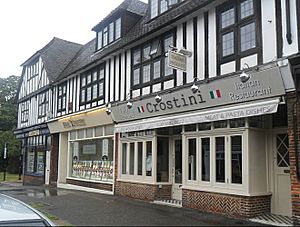 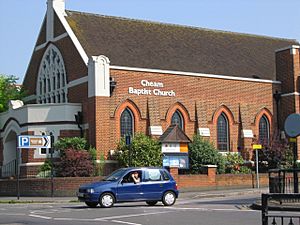 Cheam Village is centred on the crossroads between Sutton, North Cheam, South Cheam and Ewell. As well as bus services, it is served by Cheam mainline station which is in London Travelcard Zone 5 and one stop from Sutton, about a mile away, and two from Epsom, about three miles away. Services from Cheam to central London include direct trains to Victoria which take about 30 minutes.

It has a conservation area and a number of historic buildings dating back several centuries, including Nonsuch Mansion, the gabled Whitehall and Lumley Chapel (see below) and a Georgian former Rectory.

Cheam Village is a part of Cheam. Cheam Village Conservation Area was designated in 1970 – it covers historic parkland, housing of varying styles and age and a Tudor shopping area with timber detailing and leaded-lights. Its shops include Waitrose and Majestic Wine. Its catering facilities include branches of Costa, Prezzo, and Pizza Express. There are a number of independent establishments, including furniture shops and gift shops. It has banks, building societies and estate agents. The entrance to Nonsuch Park with its historic mansion (see below) is two hundred yards from the village centre crossroads.

North Cheam is centred 1 mile (1.6 km) north, at the crossroads between Cheam Village and Worcester Park, Epsom and Morden. There are established bus routes serving the area, including services 213 (Sutton to Kingston), 151 (Wallington to Worcester Park), 93 (North Cheam to Putney Bridge) and the less frequent X26 express service between Heathrow Airport and Croydon.

Victoria Junction is the centre of North Cheam. The area consists of a large Sainsbury's supermarket with adjoining Starbucks, a neighbouring park, a number of independent shops and restaurants, a post office and a Costa. There are currently plans to redevelop the site of a vacant 1960s building at the North Cheam crossroad and expand commercial and residential buildings. 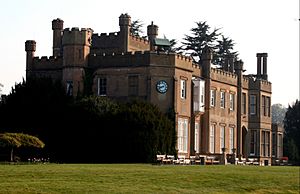 Nonsuch Mansion is a Grade II listed Gothic revival mansion within Nonsuch Park. The service wing is occasionally open to the public. It is a popular place for wedding receptions, as it is available for hire. In medieval times it was part of the three thousand acre manor of Cuddington. The mansion was originally built in 1731–43 by Joseph Thompson and later bought by Samuel Farmer in 1799. He employed Jeffry Wyattville to rebuild it in a Tudor Gothic style in 1802-6. Farmer was succeeded by his grandson in 1838 under whom the gardens became famous. 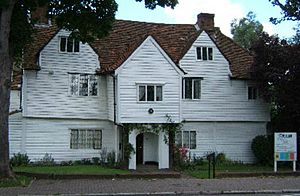 Whitehall is a timber framed and weatherboarded house in the centre of Cheam Village. It was originally built in about 1500 as a wattle and daub yeoman farmer's house but has been much extended. The external weatherboard dates from the 18th century. In the garden there is a medieval well which served an earlier building on the site.

Now an historic house museum, the building features a period kitchen, and house details from the Georgian, Victorian and Edwardian eras. The museum temporarily closed in 2016 to allow for a £1.6m refurbishment of the building. It will reopen in 2017 with improved facilities. 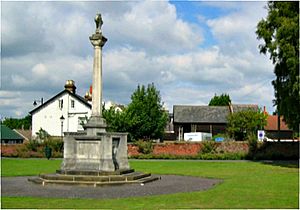 Close to Cheam Library and the much-rebuilt Church, the memorial is to the many people of Cheam who lost their lives during World War I, World War II and to a lesser extent The Falklands War.

There are a number of inscriptions on the structure, including one at the 12 O'Clock Face which reads: 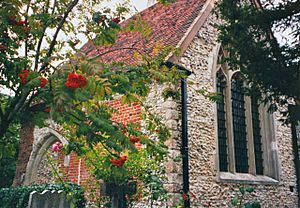 Situated next to St Dunstan's Church, Lumley Chapel is the oldest standing building in the London Borough of Sutton, and contains many notable monuments to local families. It has been designated by English Heritage as a Grade II* listed building, and is under the care of a national charity, the Churches Conservation Trust.

Too small to be used for regular worship, it is open to visitors. Its key is held by nearby properties. 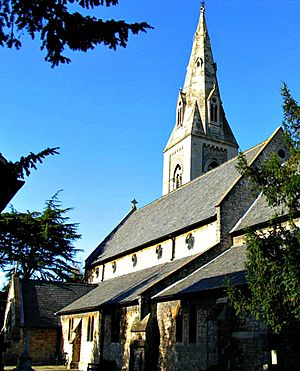 The parish church of St Dunstan is Grade II* listed. It was built in Cheam Village in 1864 next to Lumley Chapel on the site of a medieval church. It was built with Kentish ragstone below pitched slate roofs with dressings to windows and doors in Bath Stone. It was designed by F. H. Pownall in the Gothic revival architectural style, and features polychrome brickwork decoration internally.

The lychgate, dated 1891, at the entrance to the churchyard, is listed Grade II. In the churchyard are three tombs, each of which is Grade II listed.

The Old Rectory is a large part timber-framed house, built in the Tudor period, but extended and remodelled in the Eighteenth Century. It is occasionally open to the public.

A large timber-framed and weatherboarded Yeoman farmers house, forming part of the Cheam Conservation Area with St Dunstan's Church, Whitehall, The Old Rectory and the Lumley Chapel. The Old Farmhouse has a crown post roof and large Tudor axial chimney stack in the centre with large fireplaces. The earliest part of the house is 15th Century, with several building stages extending the house in the 16th and 17th centuries, creating a Baffle House design popular in the 17th Century.

Many original features remain including oak doors and hinges, window shutters and fireplaces. Much of the timber framing is exposed throughout the house. Recent excavation and ground imaging uncovered a large Tudor kitchen underneath the house with a Tudor hearth and hood visible. Access to the cellar kitchen was by a staircase going north to south, which is now under the floor of the current kitchen. A file of text and images relating to the house is available in the Conservation Archive in Sutton Library. 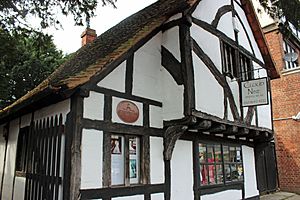 The Old Cottage was built in the late 15th or early 16th century. Initially built as a cottage, it became a small brewery in the 18th century. It originally stood in the Broadway (then Malden Road) near the junction with Ewell Road. Under threat of demolition when the road was widened in 1922, it was saved by the local council, working with a local architect and historian. The building was dismantled by removing the original wooden pins from the timber frame. The parts were then moved to the present site one hundred yards down the road and reassembled. The Old Cottage features a local historical plaque, and is now used as a bridal wear shop.

Cheam is mainly built up, but retains Cheam Park and Nonsuch Park, the latter home to a historic building, Nonsuch Mansion and extensive flower gardens.

Apart from the aforementioned St Dunstan's church, St Paul's Howell Hill is on Northey Avenue at the far west of the town although it is actually in the borough of Epsom and Ewell. It is known locally due to its prominent presence on a roundabout and its contemporary design. At the eastern end of Northey Avenue is St Andrews United Reform Church. Cheam Baptist Church is located next to St Dunstan's Church. Cheam Methodist Church is in the east of the town just off the A217 and is also home to Sutton Schoolswork, the local Christian schools charity working in the borough of Sutton.

Lee Boxell, a 15-year-old schoolboy, disappeared near his home in Cheam on 10 September 1988. He was on his way to a football match at Selhurst Park and has not been seen since. The case remains unsolved. It was featured in the national press and on BBC TV's Crimewatch.

All content from Kiddle encyclopedia articles (including the article images and facts) can be freely used under Attribution-ShareAlike license, unless stated otherwise. Cite this article:
Cheam Facts for Kids. Kiddle Encyclopedia.