Nonsuch Mansion is an historic house located within Nonsuch Park on the border of Greater London and north Surrey, England. It is on the boundaries of the borough of Epsom and Ewell and the London Borough of Sutton. It has been listed Grade II* on the National Heritage List for England since April 1954. 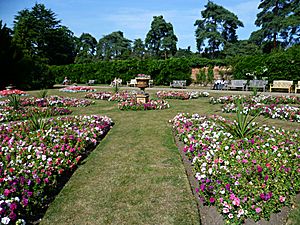 In medieval times it was part of the three thousand acre manor of Cuddington. The mansion was built in between 1731 and 1743 by Joseph Thompson and later bought by Samuel Farmer in 1799. He employed Jeffry Wyatville to rebuild it in a Tudor Gothic style in 1802 to 1806. Farmer was succeeded by his grandson in 1838 under whom the gardens became famous. Nonsuch Mansion bears a resemblance in its design to the original design of Nonsuch Palace, whose construction was begun by King Henry VIII in the 16th century.

In 1937 the Farmer family sold the mansion to a group of local authorities.

In 2020/2021 it served as a major vaccination Hub for the Covid-19 vaccination for the London Borough.

Markings on the building

Built within the north porch of the mansion is a block from the original Nonsuch Palace that bears an inscription which means "1543 Henry VIII in the 35th year of His reign."

The Farmer family's crests are noticeable throughout the mansion, bearing a motto 'Hora e sempre' – now and forever.

All content from Kiddle encyclopedia articles (including the article images and facts) can be freely used under Attribution-ShareAlike license, unless stated otherwise. Cite this article:
Nonsuch Mansion Facts for Kids. Kiddle Encyclopedia.