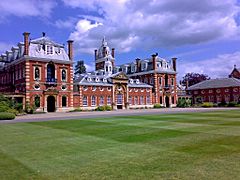 View of some of the College buildings from the South Front.

Wellington College is a co-educational day and boarding independent school in the village of Crowthorne, Berkshire, England. Wellington is a registered charity and currently educates roughly 1,200 pupils, between the ages of 13 and 18, per annum. The college was built as a national monument to the first Duke of Wellington (1769–1852), in whose honour it is named. Queen Victoria laid the foundation stone in 1856 and inaugurated the School's public opening on 29 January 1859.

Many former Wellington pupils fought in the trenches during the First World War, a conflict in which 707 of them lost their lives, many volunteering for military service immediately after leaving school. A further 501 former pupils were killed in action in the Second World War.

Wellington College was granted a royal charter in 1853 as "The Royal and Religious Foundation of the Wellington College", and was opened in 1859. Its first Master, which is the title of the headmaster, was Edward White Benson, who later became Archbishop of Canterbury. The college's Visitor is H.M. the Queen.

Originally, the school educated sons of deceased officers who had held commissions in the Army. In 1952 a Supplementary Royal Charter extended the privilege of eligibility to the orphan sons of deceased officers of the Royal Navy, Royal Marines and Royal Air Force. By the 1960s, the school was considering becoming co-educational, but for some years the lack of financial resources prevented it from doing so. The first girls were admitted into the Sixth Form in the 1970s, and the school became fully co-educational in 2005. A recent change to the scheme of reduced fees early in 2006 extended the privilege to the orphan children of deceased servicemen or servicewomen of Her Majesty's Armed Forces irrespective of rank, and to the orphan children of persons who, in the sole opinion of the Governors, have died in acts of selfless bravery. However, only a minority of the children at the school now come from military families.

Wellington has sponsored the founding of a new independent state school in Wiltshire, The Wellington Academy, which opened in 2009.

The college buildings were designed by John Shaw, Jr., who had previously worked as an architect for Eton College. For its time, the design of the College was unusual compared to the popular form, but Prince Albert, who assisted in choosing the architect, was more interested in Shaw's classical approach, having already seen the architect's design for the old Royal Naval School in New Cross, London. The main buildings were designed in a style loosely termed "French Grand Rococo",. The chapel, notably only half its originally intended size, was designed by Sir Gilbert Scott. There have been several modern buildings, the best of which follow Shaw's grand rococo style: for example, the new Nicholson modern foreign-languages building.

Wellington College stands on a magnificent 400-acre (160 ha) estate in South-East England, near Reading and Sandhurst. The grounds of the college include a 9-hole golf course, extensive woodland, and many playing fields, particularly those for cricket and rugby. The woodland area of the college is listed as a local nature reserve called Edgbarrow Woods. The grounds contain many unusual ant and spider species, and were frequented by the entomologist Horace Donisthorpe, who collected extensively there. The grounds also contain a Site of Special Scientific Interest, Wellington College Bog. 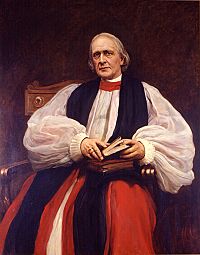 Wellington College was one of the 21 founding members of the Rugby Football Union, and pupils at the school have historically played schoolboy rugby of the highest standard. In 2008, the College became the first school to win the Daily Mail Cup at both U15 and U18 level in the same year, beating Millfield School and St Benedict's School, Ealing in their respective finals at Twickenham on 2 April 2008. In 2014/15 Wellington College 1st XV won the Rugby World School Team of the Year award, in addition to the National Rugby Awards Team of the Year Prize. They also won the National Daily Mail Trophy title, as well as the Rosslyn Park National Schools 7s Open. A number of Old Wellingtonians play professional rugby union, including: James Haskell (England), Paul Doran-Jones (England), Max Lahiff (Bath Rubgy), Sam Edgerly and Christian Lewis-Pratt (both England 7s), Max Evans and Thom Evans (Scotland) Brett Herron (Bath), Sam Aspland-Robinson (Harlequins), Seb Adeniran-Olule (Harlequins), Rory Brand (London Irish), Matt Williams (London Irish), Isaac Curtis-Harris (London Irish), Tom Parton (London Irish), and Madison Hughes (USA 7s). The school has one of only around 20 racquets courts in the UK, one of 27 real tennis courts in the UK and until recently three Eton Fives courts, now a café bar as part of the sports club. The school has a clay pigeon shooting range on site, also having its first female captain of shooting in 2016: Amy Cribb. Wellington College has been named as number one golf college in the UK on a few occasions with wins in 2009 at St Andrews and 2012 at Carnoustie in the Independent Schools Golf Association (ISGA) National Finals.

First published in 1859, the year of the College's foundation, The Wellingtonian has provided coverage of the current affairs of Wellington College and the wider world for over 150 years.

Student writers contribute to the magazine; student designers design the magazine; and student Editors compile the magazine. In recent years, The Wellingtonian has featured interviews with famous alumni of the College, including Sebastian Faulks and Will Young.

In the past, WTV interviewed Ben Goldacre, Alexander Armstrong, AC Grayling and Tim Smit at the 2012 The Sunday Times Festival of Education. WTV created a James Bond parody featuring Headmaster Anthony Seldon which was featured in an article in the February 2014 edition of Private Eye. In 2014, it interviewed Simon Singh, Will Poulter and Katie Hopkins at the 2014 The Sunday Times Festival of Education. A 2014 Independent Schools Inspectorate integrated inspection report on Wellington College noted that “the innovative use of new media, as demonstrated by WTV, enriches parental communication, providing a detailed insight into the life of the pupils at the school”.

In 2015, as an opening film for the school's Speech Day, WTV created a parody of Pharrell Williams' hit-single 'Happy', which was featured in many national newspapers. Alongside supporting many of the school's other societies through various documentary-style films, WTV has been acclaimed for its work at the Telegraph Festival of Education with interviews with Gyles Brandreth and Ellie Bamber.

In 2017, WTV produced a film called 'Planet Wellington', feeding off the success of the popular BBC series 'Planet Earth II', for the opening of the 2017 Speech Day. The 2016-17 year also saw the creation of the series 'Pink Pav Sessions' and 'Solo'. Similarly to 2017, WTV produced the opening film for Speech Day 2018, 'Speech Day Pitch', in which the Master pushed his vision for the 'Five I's' while the student team continued to bring exclusive coverage of the Pearson Festival of Education with headline interviews with Piers Morgan and Susie Dent. In December 2018, WTV's 2012 interview with humanitarian Peter Dalglish was used in an episode of Al Jazeera's 101 East, entitled 'Nepal's Children at Risk'.

The Wellington College Combined Cadet Force, or CCF, has existed in its various forms since 1880. Commissioned members of the teaching staff who serve as CCF officers are attached to The Duke of Wellington's Regiment. The college also traditionally has two teams of field gun runners, and two runs are made annually at the college speech day. In 2012 field gun teams from the College took part in the British Military Tournament at Earl's Court, including female runners for the first time at the event. The Wellington College CCF is split into seven categories. These are Army, Royal Navy, Royal Air Force, Royal Marines, Cavalry, Drum Corps and Marching Band.

There are 17 houses at Wellington. The vast majority are composed of boarders with a small number of day pupils also, although two, Wellesley and Raglan, are day-pupil exclusive. Each house is either an 'in-house' or an 'out-house': in-houses are located within the main school buildings and quads while out-houses are located elsewhere on the college grounds. Each house has aspects distinguishing it from other houses, such as its own colours, insignia, and arms (with the arms of each house being incorporated into one of each of the stained glass windows within the college chapel). Each house was named in honour of a significant figure in history, most usually although not exclusively figures associated with the many campaigns and battles of Wellington; notably the Blücher is named in honour of general field marshal von Blücher, the Combermere is named in honour of field marshal Stapleton Cotton, and the Stanley is named in honour of the longest serving leader of the Conservative and Unionist Party the 14th Earl of Derby.

The Orange, Combermere, Hopetoun, and Anglesey were all formerly boys' houses but converted to girls' houses between 2005 and 2011.

The Old Wellingtonian Society maintains a register of names of all who have passed through the college since the school's establishment in 1859 and the addresses of all living alumni.

All content from Kiddle encyclopedia articles (including the article images and facts) can be freely used under Attribution-ShareAlike license, unless stated otherwise. Cite this article:
Wellington College, Berkshire Facts for Kids. Kiddle Encyclopedia.