Sandhurst is a town and civil parish in the Bracknell Forest borough in Berkshire, England. It is in the south eastern corner of Berkshire, and is situated 32 miles (51 km) west-southwest of central London, 2.5 miles (4.0 km) north west of Camberley and 5 miles (8.0 km) south of Bracknell.

Sandhurst is known worldwide as the location of the Royal Military Academy Sandhurst (often referred to simply as "Sandhurst", "The Academy" or "The RMA"). Despite its close proximity to Camberley, Sandhurst is also home to a large and well-known out-of-town mercantile development. The site is named "The Meadows" and has a Tesco Extra hypermarket and a Marks & Spencer, two of the largest in the country. A large Next plc clothing and homeware store is open on the site of the old Homebase.

Sandhurst is located at . Sandhurst is situated within the South East of England on the border of the Home Counties of Berkshire, Hampshire and Surrey. The town itself consists of four main districts, from west to east: Little Sandhurst, Sandhurst (central) and College Town, with Owlsmoor to the northeast. North of the town are Edgbarrow Woods and Wildmoor Heath. To the east is Broadmoor Bottom, an expanse of heathland together with fir tree plantations. This eventually backs onto the high-security Broadmoor Hospital.

Sandhurst is bordered, on the south, by the River Blackwater, and several of the Yateley Lakes along its course are within the parish, notably Trilakes with its country park. This is also the county boundary with Hampshire at Blackwater. The town of Crowthorne is to the north, the village of Finchampstead to the west, and Camberley, across the Surrey county boundary, is on its southeastern side. This is the closest sizeable town, though Sandhurst is also only 9.5 km (5.9 mi) south of the new town of Bracknell.

The soil is sandy, with a subsoil of sand and gravel. 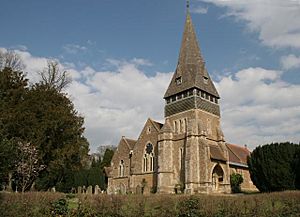 The Church of St Michael and All Angels

The name of the village is Anglo-Saxon and originates from the sandy soils and the hurst (a wooded eminence) of the area. In early 14th century records, Sandhurst appears as part of township of Sonning, a large minster parish spreading over much of eastern Berkshire, which later became a hundred when its villages obtained their own churches. These lands belonged to the Bishops of Salisbury. There were two manors in Sandhurst: ‘Hall’ in the grounds of what is now the Royal Military Academy and ‘Sandhurst’ on the site of Sandhurst Lodge. Nothing remains of the original buildings.

In the early modern era, Sandhurst parish was a small farming community on the very edge of Windsor Forest, Sandhurst Walke being an important forest division subject to forest laws. Locals had the right to cut turf, bracken, heather and wood that was primarily cultivated to feed the forest deer. These were hunted by Royal parties from a hunting lodge in the vicinity of Hart's Leap Road. A number of disputes are on record, showing how Sandhurst people sometimes took more resources than was allowed.

Life changed very little in Sandhurst until the 19th century when large sections of land were sold for the building of the Royal Military College, which moved from Marlow in 1812.

The railway arrived in 1849 and a number of large country residences were subsequently erected in the area: amongst them, Harts Leap, Forest End, St Helens Upland, The Warren, Longdown Lodge, Ryefield, Snaprails, and Ambarrow Court. Sandhurst Lodge was erected in about 1858 by Robert Gibson and leased to John Walter, of the Times Newspaper, and then Sir William Farrer, solicitor to Queen Victoria and The Duke of Wellington. Perry Hill and The Ceders came later. Only a few remain today. The others have been demolished and land developed.

Such large houses and institutions, including the Broadmoor Asylum for the Criminally Insane and Wellington College in nearby Crowthorne, led to a great expansion of the local population as people moved into the area looking for work. Further residential housing was erected for these workers, as well as more schools for their children, more places of worship and other community resources.

St. Michael's Church of England School, Little Sandhurst, was opened in 1862 and other schools followed in quick succession:

Until Sandhurst Comprehensive – now Sandhurst School – was built in 1969 in Owlsmoor, Secondary-age pupils were sent to Edgbarrow School in Crowthorne, Forest Grammar School for boys in Winnersh or Holt School for girls in Wokingham.

From the late 1950s to the 80s, large housing estates have been built creating the conglomerate town of today from the original four villages of College Town, (Central)Sandhurst, Little Sandhurst and Owlsmoor.

All content from Kiddle encyclopedia articles (including the article images and facts) can be freely used under Attribution-ShareAlike license, unless stated otherwise. Cite this article:
Sandhurst, Berkshire Facts for Kids. Kiddle Encyclopedia.