Yateley is a town and civil parish in the English county of Hampshire. It lies in the north-eastern corner of Hart District Council area. It includes the settlements of Frogmore and Darby Green to the east. It had a population of 21,011 at the 2001 census. The four wards that comprise Yateley and their 2001 populations are Yateley East (5,168), Yateley North (5,078), Yateley West (5,149), and Frogmore & Darby Green (5,616). The 2009 projection was 20,214, according to the Hart District Council website. Yateley Town Council is one of the few local councils to have been recognised under the national 'Quality Council' award scheme.

In 2011 Hart district was named the UK's most desirable place to live, and Yateley was mentioned on a BBC news article as one of the towns within the district. In 2014, it was rated one of the most attractive postcode areas to live in England.

Yateley is bounded to the north by the flood plain of the River Blackwater, much of which is occupied by the Yateley Lakes, which form a country park. The river also forms the boundary between Hampshire and Berkshire to the north. Yateley is bounded to the south by the A30 road. Between the road and the town are Yateley Commons Country Park and Blackbushe Airport. Yateley is some 35 miles (56 km) west-south-west of London and 10 miles (16 km) SE of Reading.

The Yateley Commons Country Park, with woodlands and heath, is linked by a path to nearby Castle Bottom nature reserve, linked by a trail that defines the westerly border of Yateley accessed via its residential area.

Yateley is on a gentle slope towards the Blackwater valley to the north. 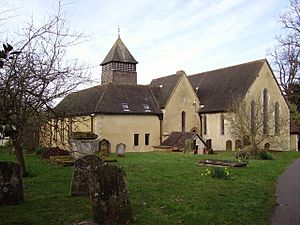 Yateley is a residential area with local businesses and light service industries. The B3272 Reading Road is the town's main business link, with numerous shops and other businesses located along this road. The area around St Peter's Church of England parish church, the Dog & Partridge public house and the village green is still referred to as "the village" by many older residents. Yateley Green is a larger open area slightly to the west where there are tennis courts, a playground, Town Council offices and a community hall; it is the location for the annual May Fayre. Yateley Cricket and Hockey Club is situated adjacent to the Blackwater Valley golf course, off Chandlers Lane. There are several other traditional public houses, besides the Dog & Partridge. The derelict public house "the Highwayman" (formerly Poets' Corner, formerly the Monteagle Arms, formerly The Lanes) was destroyed by fire in October 2015.

Yateley is mainly a commuter town with direct road links to London, Reading, Aldershot and Guildford. Yateley is about 3 miles or 5 km from Junction 4A of the M3 motorway

Bus routes are the 3 to Camberley and Aldershot and the 8 to Farnborough and Reading (Stagecoach in Hants and Surrey). The nearest station is Sandhurst, with trains towards Reading and Guildford.

The town also contains within its boundaries the Blackbushe Airport complex, which caters for leisure flights, flying lessons and small business flight operations. The complex also contains a thriving car auction, a go-kart track, parts of an abandoned World War II airfield (those parts of RAF Hartford Bridge which are not now part of Blackbushe Airport) and was once the venue for the popular Blackbushe Sunday Market.

The name Yateley derives from the Middle English 'Yate' meaning 'Gate' (into Windsor Forest) and 'Lea' which was a 'forest clearing'.

Yateley Hall in the town dates from the 13th century, but the town itself was mentioned in the Domesday Book of 1086 as Effelle. In the early 17th century, Monteagle Farm was one of the minor properties of the 'discoverer' of the Gunpowder Plot, Lord Monteagle. A tradition has grown up that some of the first plans for the plot were put together there, but this is highly unlikely. However, roads of the residential area around Monteagle Lane have been named after some of the conspirators in memory of the connection.

Through the next few centuries, Yateley developed into a coaching hub between London and Reading. Local legend has it that the curate of Yateley, named Parson Darby, was a highwayman who used the Reading Road as his main stamping ground. Darby Green, where he was hanged, is named after him. The "beast" of Yateley Morris Men is a wooden horse wearing a highwayman's disguise, in memory of Parson Darby.

The Yateley Society is a registered charity, one aim of which is to research and provide information to the public on the history, natural history, architecture and geography of Yateley.

All content from Kiddle encyclopedia articles (including the article images and facts) can be freely used under Attribution-ShareAlike license, unless stated otherwise. Cite this article:
Yateley Facts for Kids. Kiddle Encyclopedia.