Marlow ( historically Great Marlow or Chipping Marlow) is a town and civil parish within the Unitary Authority of Buckinghamshire, England. It is located on the River Thames, 4 miles (6 km) south south-west of High Wycombe, 5 miles (8 km) west north-west of Maidenhead and 33 miles (53 km) west of central London.

The name is recorded in 1015 as Mere lafan, meaning "Land left after the draining of a pond" in Old English.

From Norman times the manor, parish, and later borough were formally known as Great Marlow, distinguishing them from Little Marlow. The ancient parish was large, including rural areas north and west of the town. In 1896 the civil parish of Great Marlow, created in the 19th century from the ancient parish, was divided into Great Marlow Urban District (the town) and Great Marlow civil parish (the rural areas). In 1897 the urban district was renamed Marlow Urban District, and the town has been known simply as Marlow. 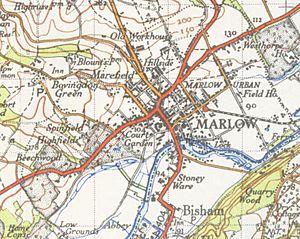 Marlow is recorded in the Domesday Book as Merlaue.

Magna Britannia includes the following entry for Marlow: "The manor of Marlow, which had belonged to the Earls of Mercia, was given by William the Conqueror, to his Queen Matilda. Henry the First, bestowed it on his natural son, Robert de Melhent, afterwards Earl of Gloucester, from whom it passed, with that title, to the Clares and Despencers, and from the latter, by female heirs, to the Beauchamps and Nevilles, Earls of Warwick. It continued in the crown from the time of Richard III's marriage with Anne Neville, until Queen Mary granted it to William Lord Paget, in whose family it continued more than a century; after which, it passed, by purchase, to Sir Humphrey Winch, in 1670; to Lord Falkland in 1686; to Sir James Etheridge in 1690; to Sir John Guise in 1718; and to Sir William Clayton in 1736. It is now the property of Sir William Clayton bart. a descendant of the last purchaser".

Marlow owed its importance to its location on the River Thames, where the road from Reading to High Wycombe crosses the river. It had its own market by 1227 (hence the name Chipping Marlow), although the market lapsed before 1600. From 1301 to 1307 the town had its own Member of Parliament, and it returned two members from 1624 to 1867.

Marlow is adjoined by Marlow Bottom, a mile to the north. Little Marlow is nearby to the east along the A4155 Little Marlow Road and Bourne End is further along the same road. To the south across the Thames are Bisham (home of Bisham Abbey) and Cookham Dean, both in Berkshire,

There has been a bridge over the Thames at Marlow since the reign of King Edward III The current bridge is a suspension bridge, designed by William Tierney Clark in 1832, and was a prototype for the much larger Széchenyi Chain Bridge across the River Danube in Budapest. 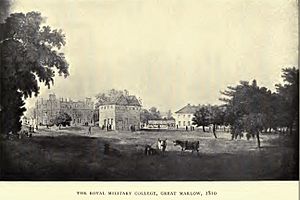 The Junior Wing of the Royal Military College, later moved to Sandhurst on the borders of Berkshire and Surrey, was once based in West Street, Marlow, at Remnantz, a large house built in the early 18th century which served as the Junior Department of the College from 1801 until 1812. The weather vane on the building features a man firing a cannon and may date from that period. The building is now owned by the Bosley family.

The Hand & Flowers, the first gastropub to hold two Michelin stars, is located on West Street. Like many local pubs, it serves the award-winning beers brewed locally in Marlow Bottom by the Rebellion Beer Company. 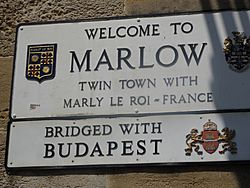 Marlow is twinned with

The A4155 road runs through Marlow town centre, with the A404 lying one mile to the east, the M40 motorway further to the north, and the M4 motorway to the south.

Marlow is served by a railway station which is the terminus of a single-track branch line from Maidenhead. The train service is known as the Marlow Donkey, which was the nickname given to the steam locomotives that once operated on the line. There is also a pub with the same name, located close to the railway station.

Bus services are provided by Arriva and Carousel Buses to neighbouring towns including High Wycombe, Henley-on-Thames and Reading.

Marlow FM is a local community radio station that was launched on FM on 11 May 2011. It broadcasts to Marlow and the surrounding areas on 97.5FM, and also streams over the internet. The station provides travel and news updates for the local area. 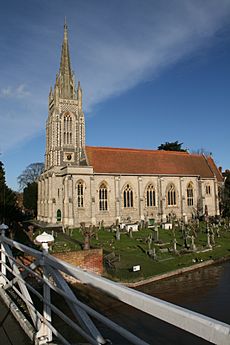 Education is provided by several schools, including: 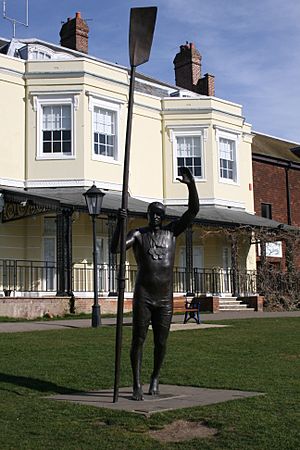 Marlow Rowing Club, founded in 1871, is one of Britain's premier rowing clubs and has produced many Olympic oarsmen including Sir Steve Redgrave. The club is based by Marlow Bridge and exercises above and below the lock. The Olympic lightweight men's double-sculls gold medallist at Beijing 2008, Zac Purchase, is a former member of Marlow Rowing Club.

Marlow F.C. is the oldest football club in the town, currently playing in Tier 8 Southern Football League Division One Central.

Marlow F.C are the only football club in England to have applied for entry into the FA Cup every season since its inception in 1871. The first England captain Cuthbert Ottaway played for Marlow F.C. Ottaway was selected to lead the England team travelling to Partick to meet Scotland on 30 November 1872 in what is now recognised as the first international match to be played. The game ended in a 0–0 draw.

Another local football club, Marlow United F.C. plays in Tier 11 Hellenic League Division One East and finished 2nd of 14 in the 2016/17 season.

Marlow Rugby Club plays at Riverwoods Drive. It was founded in 1947 and runs a range of senior, youth and mini-rugby teams.

Marlow Tennis Club was founded in 1899 and also plays at Marlow Sports Club. It has four floodlit all-weather courts and fields men's, women's and mixed teams in Bucks, Berks and Farnham Common leagues.

There are two regattas associated with Marlow; the Marlow Town Regatta and Marlow International Regatta. Earliest records indicate a regatta took place annually on the River Thames in Marlow from 1855. The latter transferred to the purpose built Dorney Lake, owned by Eton College, in 2003. Marlow still hosts its Original River Regatta which takes place annually in June. 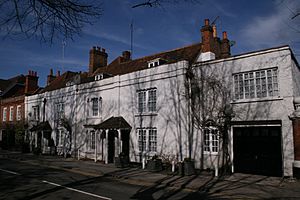 MARLOW is one of the pleasantest river centres I know of. It is a bustling, lively little town; not very picturesque on the whole, it is true, but there are many quaint nooks and corners to be found in it.

All content from Kiddle encyclopedia articles (including the article images and facts) can be freely used under Attribution-ShareAlike license, unless stated otherwise. Cite this article:
Marlow, Buckinghamshire Facts for Kids. Kiddle Encyclopedia.