Jerome K. Jerome (in full Jerome Klapka Jerome) (1859-1927) was an English novelist, playwright and humorist. He wrote books that were very funny and won him a wide public following. He is best known for the comic Three Men in a Boat (1889).

World War I and last years 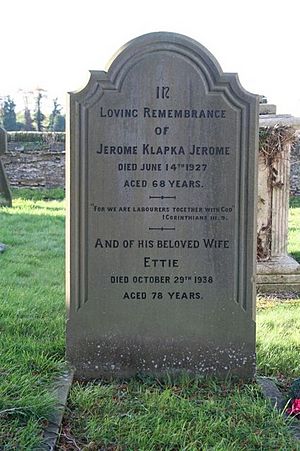 Jerome volunteered to serve his country at the outbreak of the war, but, being 56 years old, was rejected by the British Army. Eager to serve in some capacity, he volunteered as an ambulance driver for the French Army.

Jerome suffered a stroke in June 1927, on a motoring tour from Devon to London via Cheltenham and Northampton, he died 14 June. He was cremated at Golders Green and his ashes buried at St Mary's Church, Ewelme, Oxfordshire. A small museum dedicated to his life and works was opened in 1984 at his birth home in Walsall, but it closed in 2008, and the contents were returned to Walsall Museum.

All content from Kiddle encyclopedia articles (including the article images and facts) can be freely used under Attribution-ShareAlike license, unless stated otherwise. Cite this article:
Jerome K. Jerome Facts for Kids. Kiddle Encyclopedia.