Redgrave is regarded as one of Britain's greatest-ever Olympians. As of 2016 he was the fourth-most decorated British Olympian, after cyclists Sir Chris Hoy, Jason Kenny and Sir Bradley Wiggins. He has carried the British flag at the opening of the Olympic Games on two occasions. In 2002, he was ranked number 36 in the BBC poll of the 100 Greatest Britons. He received the BBC Sports Personality of the Year – Lifetime Achievement Award in 2011. 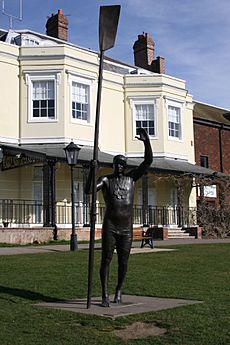 Redgrave was born in Marlow, Buckinghamshire, to Geoffrey Edward Redgrave, a submariner in the Second World War who became a builder, and Sheila Marion, daughter of Harold Stevenson, a local bus driver. His great-grandparents Harry and Susannah Redgrave moved to Marlow from Bramfield, Suffolk, in 1887. He was educated at Great Marlow School.

Redgrave's primary discipline was sweep rowing, in which he won Olympic Gold rowing both bowside and strokeside (port and starboard).

From 1991, the crews in which he rowed became renowned for their consistent dominance, winning almost every time they raced.

Redgrave won gold medals at five consecutive Olympic Games from 1984 to 2000, plus a bronze medal at the 1988 Summer Olympics.

Immediately after winning the 1996 Olympic Gold Medal, he stated that if anyone found him close to a rowing boat again, they could shoot him. However, he changed his mind shortly afterward, and resumed training after a four-month break.

In 2000, he won his fifth consecutive Olympic Gold Medal and retired from the sport. In August 2000, prior to his final Olympic Games, the BBC broadcast Gold Fever, a three-part BBC documentary which had followed the coxless four in the years leading up to the Olympics. It included video diaries recording the highs and lows in the quest for gold. At the medal ceremony after the 2000 Summer Olympics he was also presented with a gold Olympic pin by IOC President Juan Antonio Samaranch in recognition of his achievement.

At the World Rowing Championships he won nine gold medals, two silvers, and a bronze.

He won the World Championship for Indoor rowing in 1991.

He won the Wingfield Sculls for single scullers five times between 1985 and 1989.

In April 2006 Redgrave completed his third London Marathon, raising a record £1,800,000 for charity.

He starred in Top Ground Gear Force for Sport Relief in 2008, where the Top Gear Team (Jeremy Clarkson, James May and Richard Hammond) took on Ground Force with predictable results, and trashed his garden.

He launched his own Fairtrade Cotton Brand of clothing called FiveG, which is sold in Debenhams department stores.

He was involved in starting a rowing academy in India at Lavasa, the new Hill City being developed near Pune City.

In April 2008, Redgrave took part in the Olympic Torch relay for the games in Beijing, and he went on to be one of the final torch-bearers for the 2012 Summer Olympics in London, carrying the torch into the stadium, where seven young athletes shared the task of lighting the cauldron at the opening ceremony.

He was named a Patron of the Jaguar Academy of Sport in 2010.

In 2012, he took up kayaking and attempted the Devizes-to-Westminster marathon kayak race, but had to withdraw halfway through due to tiredness.

He rowed on the Gloriana as part of the royal pageant for the Diamond Jubilee of Elizabeth II.

In August 2014, Redgrave was one of 200 public figures who were signatories to a letter to The Guardian expressing their hope that Scotland would vote to remain part of the United Kingdom in September's referendum on that issue.

In May 2018, Redgrave assumed the High-Level Performance Director role for the Chinese Rowing Association to help China's rowing team earn a gold medal at the Tokyo 2020 Games and two golds at Paris 2024.

He married Ann Callaway (now Ann, Lady Redgrave) in 1988; an accomplished rower in her own right, she represented Great Britain in the women's eight at the Los Angeles Olympics in 1984 and was Chief Medical Officer to the GB rowing team from 1992 to 2001 and since 2009 their first full-time Medical Officer. He is the honorary president of British Rowing.

He is a supporter of Chelsea Football Club.

In the 2001 New Year Honours he was appointed a Knight Bachelor "for services to Rowing", which he received in Buckingham Palace from Queen Elizabeth II on 1 May 2001.

He was voted the BBC Sports Personality of the Year in 2000.

He was awarded the Honorary Degree of Doctor of the University from Heriot Watt University in November 2001, having previously been awarded an Honorary Blue in 1997.

The Redgrave Pinsent Rowing Lake was opened by him and Matthew Pinsent in 2006. The lake and boathouse provide training, medical and scientific facilities for the GB rowing squad.

He was awarded the BBC Sports – Lifetime Achievement Award in 2011.

In 2013, he was awarded an honorary doctorate by the University of Edinburgh "in recognition of his outstanding sporting achievements and role as a sports ambassador".

He is commemorated at Burnham Grammar School, Redbridge Community School and Broadlands Science and Engineering School as one of the four houses there. At Linton Village College in Cambridgeshire and Woodcote High School in Croydon, there is a school faculty (house) named after him.

All content from Kiddle encyclopedia articles (including the article images and facts) can be freely used under Attribution-ShareAlike license, unless stated otherwise. Cite this article:
Steve Redgrave Facts for Kids. Kiddle Encyclopedia.