Laura Rebecca Kenny, CBE (née Trott; born 24 April 1992) is an English track and road cyclist who specialises in the team pursuit, omnium, scratch race and madison disciplines. With four Olympic gold medals, having won both the team pursuit and the omnium at both the 2012 and 2016 games, she is both the most successful female track cyclist in Olympic history (behind only Dutch track and road cyclist Leontien van Moorsel among all female cyclists), and Great Britain's most successful Olympic female competitor in any sport.

Since first appearing at the European Track Championships in 2010, she has won seven World Championship, a record fourteen European Championship and one Commonwealth Games titles, as part of a total of 29 medals. On the road, Kenny won the British National Road Race Championships in 2014, taking the under-23 title in the same race, and has ridden for the Matrix Fitness Pro Cycling team since 2015.

Laura Trott was born a month prematurely in Harlow in Essex with a collapsed lung and was later diagnosed with asthma. She was advised by doctors to take up sport in order to regulate her breathing. She enjoyed and competed in trampolining but had to give up due to respiratory problems. She grew up in Cheshunt in Hertfordshire, where she attended Turnford School. Her older sister Emma Trott is a former road racing cyclist. She is an avid supporter of Tottenham Hotspur F.C.

Together with her sister, she began cycling when her mother did so to lose weight.

She won two junior titles at both the 2009 and 2010 British National Track Championships, and placed third in the individual pursuit at the latter to win a place in the 2010 European Track Championships team pursuit squad aged just 18. After winning gold at the Euros, she went on to take her first world title at the 2011 championships, again as part of the team pursuit squad. In the run-up to the 2012 Olympics she won a further two World and two European golds, in both the team pursuit and the ominum, before securing her place in the Great Britain team as those events made their Olympic debut.

At the 2012 Summer Olympics, Trott won a gold medal in the team pursuit with Dani King and Joanna Rowsell. The team set a world record time of 3:14.051 in this event. Including pre-Olympics races and the Olympics final itself, in the six times they had ridden together they had broken the world record in every race. She also won gold in the omnium, two days after winning gold in the team pursuit.

For the 2012 road season, Trott joined Team Ibis Cycles, though she competed in only five races. 2013 saw her increase her road racing commitments with new team Wiggle Honda. Her best result was a second place at the British National Road Race Championships, bringing her the under-23 title, though her road racing was intended to function in service of her track preparation, rather than replacing it. Trott took further World and European team pursuit gold medals at the 2013 and 2014 championships, as well as European ominium title and World ominium silver in both those years. After making the 2014 Commonwealth Games in Glasgow her focus for this period, she entered the games with a kidney infection and finished well down the field in the scratch race and individual pursuit. Recovering as the Games progressed, she won a gold medal for England, in the points race. On the road she went one better at the national road championships, winning the title for her first senior road race win. 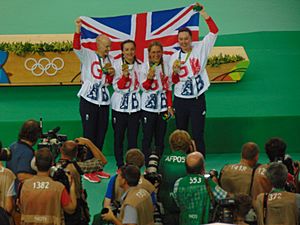 At the 2016 Olympics Trott was a favourite for the omnium, and with hopes of a medal in the team pursuit. In the team pursuit, Great Britain took gold setting world records in the qualification and final of the tournament, defeating the American world champions in the final. This made Trott the first British woman to win three golds, though this achievement was matched by Charlotte Dujardin the next day. In the Ominium, Trott dominated from the start and finished in the top two in five of the six events, to take a comfortable gold medal and once again become Britain's most successful female Olympian. Following the end of the track cycling competition at the games, Trott and her fiancé Jason Kenny were lauded in the British press as a 'golden couple', having won five gold medals between them in 2016, to reach a total of ten as a couple.

Trott married track cyclist Jason Kenny at a private ceremony on 24 September 2016. The couple live near Knutsford in Cheshire. On 14 February 2017, it was announced that the couple were expecting their first child. Their son was born on the 23 August 2017. They named him Albert Louie Kenny. Kenny announced the news with a post on Instagram.

Laura Kenny's parents are Glenda and Adrian Trott, who live in Cheshunt, and she has an older sister Emma, who lives in Christchurch, New Zealand.

She received an Honorary Degree from the University of Essex in 2013.

In 2014, the former Grundy Park Leisure Centre in Cheshunt was renamed The Laura Trott Leisure Centre in her honour following a £4 million redevelopment. Trott attended the launch ahead of competing in stage four of the first Women's Tour from Cheshunt to Welwyn Garden City.

All content from Kiddle encyclopedia articles (including the article images and facts) can be freely used under Attribution-ShareAlike license, unless stated otherwise. Cite this article:
Laura Kenny Facts for Kids. Kiddle Encyclopedia.