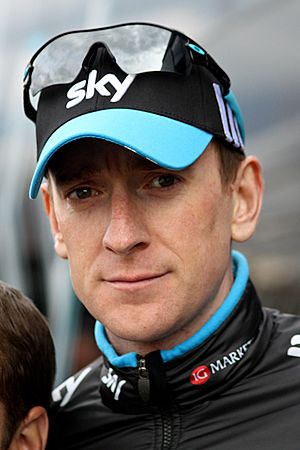 Bradley Wiggins (born 28 April 1980) is a British cyclist. He was born in Ghent, Belgium. He grew up in Kilburn and Maida Vale, London. His mother Linda is English; his father was Australian cyclist Gary Wiggins (1952-2008).

All content from Kiddle encyclopedia articles (including the article images and facts) can be freely used under Attribution-ShareAlike license, unless stated otherwise. Cite this article:
Bradley Wiggins Facts for Kids. Kiddle Encyclopedia.