Manchester Velodrome is an indoor cycle-racing track (or velodrome) in Manchester, in the north west of England. It opened in September 1994 and is the United Kingdom's leading indoor Olympic-standard track. Today it is home to the National Cycling Centre, and the headquarters of British Cycling, the national governing body. It is open to the public.

The track has a reputation for speed. By 30 March 2008, more than 15 world records had been set there. The records include Chris Boardman's 1996 and 2000 hour records and the 4000 metre team pursuit record set by the Great Britain men's team at the 2008 World Championships.

The track is 250 metres long. Its bankings reach 42 degrees in the middle. The track is as steep at the top as it is on the black (racing) line. On 21 May 2007 the velodrome closed to be re-surfaced. The old track was relaid with Siberian pine. It reopened on 16 July 2007, and is now considered smoother to ride.

The Revolution Series was introduced in 2003 to make track cycling more popular. Its goal was to try and build on the success of the well attended events like the World Championships and World Cup Classics Meetings. It was also to provide more regular events for fans to go to. The series started with 4 events over the winter season and quickly built up good regular crowds. The first close to sell out crowd came at the 7th meeting, in 2005, when all seats were sold with a further number of fans standing. The first official complete sell out came at Revolution 14 and is now a regular occurrence.

Alongside the senior racing, the Future Stars competition also runs at each Revolution event. This series involves young riders, usually 15-16 year olds, and puts them through a number of races each night to test both their sprint and endurance skills. 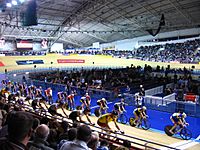 Riders on the track during Revolution 22 at Manchester Velodrome

An incomplete list of events which Manchester Velodrome has hosted:

The velodrome is not just solely for the use of professional riders. Cycling fans can also have the opportunity of riding around the famous boards as well. Regular sessions are run every week at the velodrome, starting from taster sessions right up to serious training. A taster session involves some basic training and an hour riding the track.

On 2 July 2009 cycling fans Kraftwerk performed at the Manchester Velodrome as part of the 2009 Manchester International Festival. During the performance of the song Tour de France, four members of the British Olympic Cycling Team entered the velodrome and cycled circuits.

All content from Kiddle encyclopedia articles (including the article images and facts) can be freely used under Attribution-ShareAlike license, unless stated otherwise. Cite this article:
Manchester Velodrome Facts for Kids. Kiddle Encyclopedia.