Bracknell is a large town and civil parish in Berkshire, England, the westernmost area within the Greater London Urban Area and the administrative centre of the Borough of Bracknell Forest. It lies 11 miles (18 km) to the east of Reading, 9 miles (14 km) south of Maidenhead, 10 miles (16 km) southwest of Windsor and 25 miles (40 km) west of central London.

Originally a market village and part of the Windsor Great Forest, Bracknell experienced a period of huge growth during the mid-20th century when it was declared a new town. Planned at first for a population of 25,000, Bracknell New Town was further expanded in the late 1960s to accommodate a population of 60,000. As part of this expansion, Bracknell absorbed many of the surrounding hamlets including Easthampstead, Ramslade and Old Bracknell. As of 2018, Bracknell has an estimated population of around 84,000. It is a commercial centre and the UK headquarters for several technology companies.

The town is surrounded by Swinley Forest (up to Winkfield Row) and Crowthorne Woods on the east and south. The urban area has absorbed parts of many local outlying areas including Ascot, Warfield, Winkfield and Binfield. 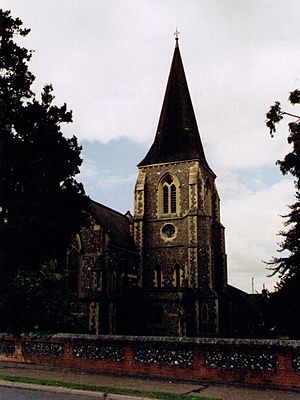 The name Bracknell is first recorded in a Winkfield Boundary Charter of AD 942 as Braccan heal, and may mean "Nook of land belonging to a man called Bracca", from the Old English Braccan (genitive singular of a personal name) + heal, healh (a corner, nook or secret place). An early form of the town's name, Brakenhale, still survives as the name of one of its schools. The town covers all of the old village of Easthampstead (though not all of the old parish) and the hamlet of Ramslade.

There is a Bronze Age round barrow at Bill Hill. Easthampstead Park was a favoured royal hunting lodge in Windsor Forest and Catherine of Aragon was banished there until her divorce was finalised. It was later the home of the Trumbulls who were patrons of Alexander Pope from Binfield.

To the north-east of the town is to be found the Quelm Stone, a standing stone, and to the south-west, just over the border in Crowthorne, is Caesar's Camp, an Iron Age hill fort.

One of the oldest buildings in the town is the 'Old Manor' public house, a 17th-century brick manor house featuring a number of priest holes. Next door once stood the 'Hind's Head' coaching inn, where it is said Dick Turpin used to drink. It is believed that there were once underground tunnels between the two, along which the famous highwayman could escape from the authorities. Other surviving old pubs are the Red Lion and the Bull, all timber-framed and dating from before the 18th century.

The oldest place of worship in the town is the parish church of St Michael and St Mary Magdalene in Easthampstead. There has been a church there since Saxon times, although the present building dates from the mid 19th century, except for the lower portions of the Tudor tower. Holy Trinity Church near the town centre was built in 1851.

The new town was planned for 25,000 people; it was intended to occupy over 1,000 hectares (about 6 square miles) of land in and around 'Old Bracknell' in the area now occupied by Priestwood, Easthampstead, Bullbrook and Harmans Water. The existing town centre and industrial areas were to be retained with new industry brought in to provide jobs. However, the town has since expanded far beyond its intended size into farmland to the south, and major expansion is now, as of 2008, under way (Jennett's Park) to the west of the town at Peacock Farm and The Parks on the site of the former RAF Staff College.

At the heart of most Bracknell neighbourhoods is a church, a small parade of shops, a primary school, a community centre and a pub. The neighbourhoods varied in population from 3,000 to 9,000. The plans included pedestrianisation, the construction of a ring road, and segregation of industrial areas from residential areas.

A slightly confusing feature of some of the estates is that streets only have names, not titles – in Birch Hill, Crown Wood, Great Hollands and others there is no 'Road', 'Avenue', 'Street', just 'Frobisher', 'Jameston', 'Juniper', 'Jevington'. The residential streets are, however, named in alphabetical order in Great Hollands and Wildridings, with As, through Ds, such as Donnybrook, in Hanworth, Js, such as 'Jameston', 'Juniper' and 'Jevington' in Birch Hill.

Because of Bracknell's age, it was decided that it should undergo renovation. Designs and plans were submitted and rejected first time round. The council went for a second attempt and were accepted, work was due to commence early in 2008 but due to the global credit crises plans have been postponed. The cost is estimated at around £750 million. It is hoped that the regeneration will provide brand new services, a completely redeveloped town centre, 1,000 new homes and new police and bus stations.

A major refurbishment of the town centre is taking place with the Borough Council working in partnership with the Bracknell Regeneration Limited Partnership a registered company in Jersey, Channel Islands (Legal & General and Schroders) to regenerate the town centre with new shops and facilities.

The first stage of the redevelopment began with the opening of a new Waitrose store in December 2011. By June 2013 shops in the northern part of the town in Broadway and Crossway had been vacated. Demolition of this area then began in September 2013, and was completed in December 2013. Construction of new shops, restaurants, and a Cineworld cinema began in April 2015, with a completion date of September 2017.

According to the Office for National Statistics in 2018 there were 121,676 people in Bracknell Forest.

61% of residents identify themselves as Christian. The second most common belief is 'none', with 35% of residents choosing this in the census, in third place is Hinduism at 1.61%, followed by Islam at 1.13% and Buddhism at 0.73%.

The demonym for a person from Bracknell is Bracknellian. 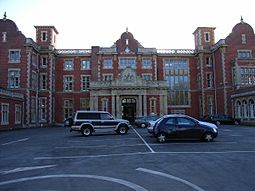 Manufacturing industry has largely disappeared since the 1980s. Former significant sites included Clifford's Dairy in Downshire Way and British Aerospace (originally Sperry Gyroscope) now occupied by Arlington Square, a 22-acre (8ha) business park of which the first stage was completed in 1995. The Thomas Lawrence brickworks on the north side of the town was famous for 'red rubber' bricks to be found in the Royal Albert Hall and Westminster Cathedral, and in restoration work at 10 Downing Street and Hampton Court Palace.

In the town centre was the 12-storey Winchester House, formerly owned by 3M who moved to new premises in Farley Wood on the town's northern edge in 2004. The building was demolished and is to be replaced with blocks of flats The town was also the home of Racal and Ferranti Computer Systems Ltd. The Met Office maintained a large presence in the town until 2003, when it relocated to Exeter in Devon; however, the junction of the A329 and A3095 is still named the "Met Office Roundabout". Many businesses are located on the town's three industrial areas.

Easthampstead Park in the southern suburb of Easthampstead is now a conference centre owned by Bracknell Forest Borough Council.

The town covers areas previously in the parishes of Easthampstead, Warfield, Binfield and Winkfield. The town's centre lies just north of the railway station with completely pedestrianised and much undercover shopping around Princess Square, Charles Square and the Broadway. There are 'out-of-town' shops, a multiscreen cinema and ten pin bowling complex at the Peel Centre. Just to the west are the Western and Southern industrial estates, either side of the railway line. There are many residential suburbs (see settlement table below) of varying dates, the oldest being Priestwood and, of course, Easthampstead village.

The former RAF Staff College buildings in Harmans Water, now closed, was part of the Joint Services Command and Staff College. This site is now, as of 2008, being redeveloped for housing by Wimpey, with an estimated 730 houses on the college's former site. The south-western corner of the town remains rural around Easthampstead Park and the wooded Yew Tree Corner. However, a new housing development called Jennett's Park is currently being built (from 2007) at Peacock Farm and on part of what was historically the grounds of Easthampstead Park. There are large ponds at Farley Wood and the Easthampstead Mill Pond between Great Hollands and Wildridings, and two lakes at South Hill Park. The Bull Brook emerges above ground just within the bounds of the suburb of Bullbrook. 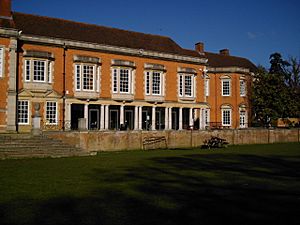 In the south of the town is South Hill Park, a mansion dating from 1760, although much rebuilt, that now houses a large arts centre. The Wilde Theatre was opened in 1984, named after Oscar Wilde who created the character 'Lady Bracknell' in his play The Importance of Being Earnest. South Hill Park has been home to a number of major music festivals over the years:

Bracknell has been used in the filming of many TV shows and films, such as Harry Potter and the Philosopher's Stone (Martins Heron) and Time Bandits (Birch Hill). Bracknell is given the name 'Laxton' in the TV detective series Pie in the Sky and Waterside Park was used for the exterior of the police HQ in the same series. Bracknell has also featured in the 1991 Roger Daltrey film Buddy's Song.

The Offence (1972), a psychological thriller with Sean Connery and Ian Bannen, was filmed in Bracknell. There are scenes in the town centre, on Broadway, Charles Square and Market Street. The flat for Connery's character was filmed at the listed Point Royal, and the bulk of the outdoor scenes were taken around Wild Ridings, specifically Arncliffe, Crossfell, Mill Pond and Mill Lane.

The wages snatch scene in Villain (1971), a gangster film with Richard Burton, was filmed in Ellesfield Avenue on the Southern Industrial Estate outside the former Clark Eaton glass factory, with the ICL tower block (under construction at the time) visible in the background; after the robbery the gang make their getaway along Peacock Lane nearby and hijack a car at the junction with the footpath from Tarmans Copse (now Osprey Avenue on the Jennett's Park estate).

Bracknell is featured in the PlayStation 3 title Resistance: Fall of Man set in 1951, as the location at which power conduits travel deep underground South East England to power the Chimeran fortresses. It also featured in the sequel Resistance:2 with a similar role.

The BBC show The Wrong Mans is set almost entirely in Bracknell.

Tracy Beaker actress Dani Harmer was brought up in Bracknell.

The town has good road links and is situated at the end of the A329(M) motorway, midway between Junction 3 of the M3 and Junction 10 of the M4 motorways. A proposed motorway link between the M3 and the M4 to be called the M31 would have passed to the west of the town centre, but only the section that is now the A329(M) and the A3290 was built.

The town has a large leisure centre, the Bracknell Leisure Centre, and the Coral Reef Water Park. A golf course, the Downshire Golf Complex. Two tennis Clubs, the Bracknell Lawn Tennis Club and Esporta, the Royal County of Berkshire Club. There are 2,600 acres (11 km2) of Crown Estate woodland at the Look Out Discovery Centre.

A number of organisations are active in the area. These consist of an Army Cadet Force detachment (7 Platoon Bracknell) and the Air Training Corps (2211 Squadron), Saint John Ambulance Cadets and the Bracknell Forest Lions Club, which was formed in 1968 to help those in need. 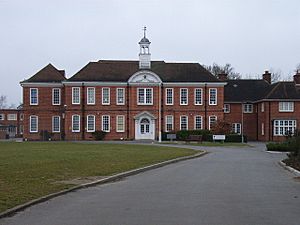 The area has various schools including St Joseph's Catholic Primary School, The Brakenhale School, Easthampstead Park School, Garth Hill College and Ranelagh Church of England School. Bracknell and Wokingham College of further education is also based in the area.

All content from Kiddle encyclopedia articles (including the article images and facts) can be freely used under Attribution-ShareAlike license, unless stated otherwise. Cite this article:
Bracknell Facts for Kids. Kiddle Encyclopedia.