Kids Encyclopedia Facts
For the district, see Borough of Wokingham. For other uses, see Wokingham (disambiguation).
Not to be confused with Woking.

Wokingham is a market town in Berkshire, England, a constituent part of the Reading/Wokingham Urban Area. Wokingham was a borough before the 1974 reorganisation of local government, when it merged with Wokingham Rural District to form the new Wokingham District. Borough status was granted in 2007. It is 37 miles (60 km) west of London, 7 miles (11 km) southeast of Reading, 8 miles (13 km) north of Camberley and 4 miles (6 km) west of Bracknell. 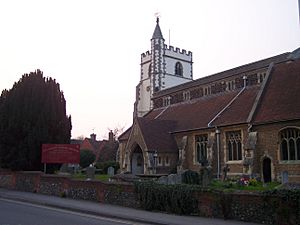 Wokingham means 'Wocca's people's home'. Wocca was apparently a Saxon chieftain who would also have owned lands at Wokefield in Berkshire and Woking in Surrey. In Victorian times, the name became corrupted to Oakingham, and consequently the acorn with oak leaves is the town's heraldic charge, granted in the 19th century.

The courts of Windsor Forest were held at Wokingham and the town had the right to hold a market from 1219. The Bishop of Salisbury was largely responsible for the growth of the town during this period. He set out roads and plots making them available for rent. There are records showing that in 1258 he bought the rights to hold three town fairs every year. Queen Elizabeth granted a town charter in 1583. From the 14th to the 16th centuries, Wokingham was well known for its bell foundry which supplied many churches across the South of England.

During the Tudor period, Wokingham was well known as a producer of silk. Some of the houses involved in these cottage industries are still to be seen in Rose Street. The houses with the taller ground floors housed the looms. This can be seen from the position of the exterior beams of the houses. It is said that one of the original Mulberry bushes (favourite food of the silk worm), still remains in one of the gardens.

In the years 1643–44 Wokingham was regularly raided by both sides in the Civil War. These raids would involve the looting of livestock and trading goods, and over thirty buildings were burnt down, accounting for nearly 20% of buildings in the town at that time. It was not until the early 18th century that Wokingham had fully recovered.a

Wokingham was once famous for its Bull-Baiting. In 1661 George Staverton left a bequest in his will giving two bulls to be tethered in the Market Place and baited by dogs on St. Thomas' Day (21 December) each year. The bulls were paraded around the town a day or two before the event and then locked in the yard of the original Rose Inn which was situated on the site of the present-day Superdrug store. People travelled from miles around to see the dangerous spectacle. A number of dogs would be maimed or killed during the event and the bulls were eventually destroyed. The meat and leather were distributed amongst the poor people of the town. Some of the spectators also sustained fatal injuries. In 1794 on the morning after the bull-baiting Elizabeth North was found dead and covered with bruises. In 1808, 55-year-old Martha May died after being hurt by fighters in the crowd. The cruel 'sport' was prohibited by the Corporation in 1821 but bulls were still provided at Christmas and the meat distributed to the poor. Bull-baiting was banned by Act of Parliament in 1833.

In 1723, the 'Black Act' was passed in Parliament to make it an offence to black one's face to commit criminal acts. It was named after an infamous band of ruffians, known as the 'Wokingham Blacks', who terrorised the local area until 29 of them were arrested after fighting a pitched battle with Grenadier Guards in Bracknell.

Historically, the local accent could be described as a blend of traditional London Cockney, influenced by aspects of West Country pronunciation. However, the rapid expansion of the town, and subsequent influx of non-locals, has led to a decline of this speech pattern since the 1970s. In the 21st Century, traditional Wokingham accents are becoming rare, particularly amongst young people, who are increasingly influenced by the spread of Multicultural London English.

The formerly important industry of brick-making has given way to software development, light engineering and service industries,and the population has greatly increased. 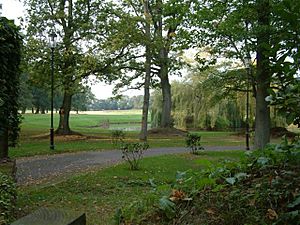 Wokingham is on the Emm Brook in the Loddon Valley in central Berkshire situated 33 miles (53.1 km) west of central London. It sits between the larger towns of Reading and Bracknell and was originally in a band of agricultural land on the western edge of Windsor Forest. The soil is a rich loam with a subsoil of sand and gravel.

Wokingham has a town centre, with main residential areas radiating in all directions. These include Woosehill to the west, Emmbrook to the northwest, Dowlesgreen, Norreys, Keephatch and Bean Oak to the east, and to the south Wescott and Eastheath. Older names include Woodcray and Luckley Green.

Much of Wokingham has been developed over the past 80 years. Woosehill and Dowlesgreen were built on farmland in the late 1960s and early '70s, along with Bean Oak. Keephatch was built in the early '90s. The Norreys Estate was built in the 1960s; however, Norreys Avenue is the oldest residential road in that area, having been built in the late 1940s as emergency housing following the Second World War. Norreys Avenue has a horseshoe shape and occupies the site of the demolished Norreys Manor. Much of the road contains 1940s-style prefabricated houses, although there are some brick houses along with three blocks of 1950s police houses.

In 2010, the council set up WEL (Wokingham Enterprise Limited) to manage a £100m regeneration project to redevelop the town centre with new retail, leisure and residential facilities, parking, roads and open spaces.

Several major expansion projects around the town are planned over the next decade, including a major redevelopment of the town centre, new north and south relief roads and at the former military base at nearby Arborfield Garrison. As of 2015, the redevelopment of the railway station and surrounding area is complete, and large scale housing construction is underway to the north-east and south-east of the town.

The A329(M) motorway, accessible from the east of town, connects Wokingham to Reading and the rest of the motorway network at junction 10 of the M4. The Wokingham junction is where the A329(M) ends and becomes the A322, for Bracknell and the M3.

Wokingham railway station is at the junction of the Waterloo to Reading line with the North Downs Line. South Western Railway manages the station and provides services, along with Great Western Railway.

Most local bus services are provided by Thames Valley Buses, but the services from Wokingham to Reading and Bracknell are operated by Reading Buses, after First Berkshire & The Thames Valley closed their Bracknell depot in the summer of 2015. There is also a football bus run on Reading FC match days by Stagecoach South to the Madejski Stadium.

In the 18th century, the Ballad of Molly Mogg was written in Wokingham. Molly was the barmaid daughter of the publican of the old Rose Inn (not on the site of the present one). They wrote the ballad extolling her virtues to pass the time.

The character of Tom the chimney sweep in Charles Kingsley's classic childhood story The Water Babies was based on the life and times of a Wokingham boy called James Seaward, who was a boy sweep in Victorian times. In his later years Seaward swept the chimneys at Charles Kingsley's home at the Rectory in Eversley, Hampshire. Seaward was elected Alderman of Wokingham from 1909 until his death in 1921. He had 12 children and many of his descendants still live locally. The Water Babies are the subject of Wokingham's first public sculpture, installed in 1999, which graces the upper level entrance to Wokingham Library.

Soldier Soldier season 7 was filmed at Bearwood College, the college was the scene for the parade ground, officers mess, and a school.

Wokingham is twinned with:

Westende Junior School is a co-educational junior school established in 1974. The school caters for children from the ages of seven to eleven. The school is near the town centre in Seaford Road and is bordered by St Crispin's School and the King George V playing field. The majority of children at Westende come from the nearby Wescott Infant School, and the two schools share a joint Parent Teachers' Association. In September 1995 the school opened ‘The Acorns’, the first junior school resource in Berkshire for pupils with a diagnosis of Special Educational Need for autism spectrum disorders (ASD).

All content from Kiddle encyclopedia articles (including the article images and facts) can be freely used under Attribution-ShareAlike license, unless stated otherwise. Cite this article:
Wokingham Facts for Kids. Kiddle Encyclopedia.