The Water-Babies, A Fairy Tale for a Land Baby facts for kids 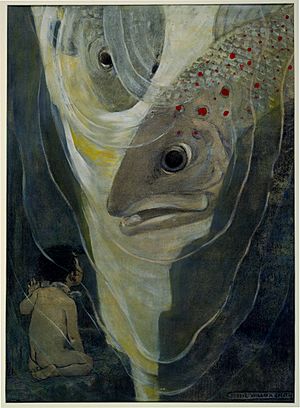 "Oh, don't hurt me!" cried Tom. "I only want to look at you; you are so handsome." Illustration by Jessie Willcox Smith c. 1916. Charcoal, water, and oil. Digitally restored. 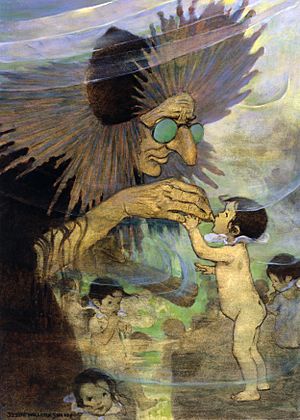 The Water-Babies, A Fairy Tale for a Land Baby is a children's novel by Charles Kingsley. Written in 1862–63 as a serial for Macmillan's Magazine, it was first published in its entirety in 1863. It was written as part satire in support of Charles Darwin's The Origin of Species. The book was extremely popular in England, and was a mainstay of British children's literature for many decades, but eventually fell out of favour in part due to its prejudices against Irish, Jews, Catholics and Americans.

The protagonist is Tom, a young chimney sweep, who falls into a river after encountering an upper-class girl named Ellie and being chased out of her house. There he appears to drown and is transformed into a "water-baby", as he is told by a caddisfly—an insect that sheds its skin—and begins his moral education. The story is thematically concerned with Christian redemption, though Kingsley also uses the book to argue that England treats its poor badly, and to question child labour, among other themes.

Tom embarks on a series of adventures and lessons, and enjoys the community of other water-babies on Saint Brendan's Island once he proves himself a moral creature. The major spiritual leaders in his new world are the fairies Mrs. Doasyouwouldbedoneby (a reference to the Golden Rule), Mrs. Bedonebyasyoudid, and Mother Carey. Weekly, Tom is allowed the company of Ellie, who became a water-baby after he did.

Grimes, his old master, drowns as well, and in his final adventure, Tom travels to the end of the world to attempt to help the man where he is being punished for his misdeeds. Tom helps Grimes to find repentance, and Grimes will be given a second chance if he can successfully perform a final penance. By proving his willingness to do things he does not like, if they are the right things to do, Tom earns himself a return to human form, and becomes "a great man of science" who "can plan railways, and steam-engines, and electric telegraphs, and rifled guns, and so forth". He and Ellie are united, although the book states (perhaps jokingly) that they never marry, claiming that in fairy tales, no one beneath the rank of prince and princess ever marries.

The book ends with the caveat that it is only a fairy tale, and the reader is to believe none of it, "even if it is true."

The book was adapted into an animated film The Water Babies in 1978 starring James Mason, Bernard Cribbins and Billie Whitelaw. Though many of the main elements are there, the film's storyline differs substantially from the book, with a new sub-plot involving Tom saving the Water-Babies from imprisonment by a kingdom of sharks.

It was also adapted into a musical theatre version produced at the Garrick Theatre in London, in 1902. The adaptation was described as a "fairy play", by Rutland Barrington, with music by Frederick Rosse, Albert Fox, and Alfred Cellier. The book was also produced as a play by Jason Carr and Gary Yershon, mounted at the Chichester Festival Theatre in 2003, directed by Jeremy Sams, starring Louise Gold, Joe McGann, Katherine O'Shea, and Neil McDermott.

A 2013 update for BBC Radio 4 written by Paul Farley and directed by Emma Harding brought the tale to a newer age, with Tomi having been trafficked from Nigeria as a child labourer.

In 2014 it was adapted into a musical by Fiona Ross and Sue Colverd, with music by David Last. A shortened version premiered at the Edinburgh Fringe Festival in 2014, with the full version being produced at the Playhouse Theatre, Cheltenham in 2015 by performing arts students of the University of Gloucestershire. It is due to be performed, again by students, in the same venue in June 2019.

All content from Kiddle encyclopedia articles (including the article images and facts) can be freely used under Attribution-ShareAlike license, unless stated otherwise. Cite this article:
The Water-Babies, A Fairy Tale for a Land Baby Facts for Kids. Kiddle Encyclopedia.