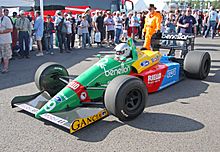 Benetton Formula Ltd., commonly referred to simply as Benetton, was a Formula One constructor that participated from 1986 to 2001. The team was owned by the Benetton family who run a worldwide chain of clothing stores of the same name. In 2000 the team was purchased by Renault, but competed as Benetton for the 2001 season. In 2002 the team became Renault F1.

All content from Kiddle encyclopedia articles (including the article images and facts) can be freely used under Attribution-ShareAlike license, unless stated otherwise. Cite this article:
Benetton Formula Facts for Kids. Kiddle Encyclopedia.