Witney is a town on the River Windrush, 12 miles (19 km) west of Oxford in Oxfordshire, England.

The place-name "Witney" is first attested in a Saxon charter of 969 as "Wyttannige"; it appears as "Witenie" in the Domesday Book of 1086. The name means "Witta's island".

Holy Trinity parish church in Wood Green was built in 1849 in the Early English style. Both St. Mary the Virgin and Holy Trinity are now members of a single team parish.

Witney Market began in the Middle Ages. Thursday is the traditional market day but there is also a market on Saturday. The buttercross in the market square is so called because people from neighbouring towns would gather there to buy butter and eggs. It was built in about 1600 and its clock was added in 1683.

The town hall is 18th-century. A local legend holds that it was designed by Sir Christopher Wren, but there is little evidence to support this claim.

Witney has long been an important crossing over the River Windrush. The architect Thomas Wyatt rebuilt the bridge in Bridge Street in 1822.

The Friends Meeting House in Wood Green was built in the 18th century. Since 1997 Quakers in Witney have met at the corn exchange. The Methodist church in High Street was built in 1850. It is now one of five Methodist churches and chapels in Witney. The Roman Catholic parish of Our Lady and Saint Hugh was founded in 1913. It originally used a chapel in West End built in 1881 but now has its own modern building. The old chapel in West End is now Elim Christian Fellowship.

West End, part of the road to Hailey, is one of Britain's best-preserved streets Although it is called West End, it is actually on the northern side of the town and gets its name from when it was not actually in Witney parish but at the west end of the adjacent Hailey parish.

Witney Workhouse was on Razor Hill (now Tower Hill). It was built in 1835–36 by the architect George Wilkinson. It had four wings radiating from an octagonal central building, similar to Chipping Norton workhouse, which also was built by Wilkinson. His younger brother William Wilkinson added a separate chapel to Witney Workhouse in 1860. During the First World War the workhouse contained prisoners of war. In 1940 it became Crawford Collets engineering factory under the direction of Leonard Frank Eve. The chapel became the factory canteen. In 1979 Crawford Collets demolished the main buildings and replaced them with a modern factory but preserved the entrance gate and former chapel. In 2004 the modern factory was demolished for redevelopment. The gate and chapel have again been preserved but the chapel is in a poor state of repair.

Witney has four museums. Cogges Manor Farm Museum, in the 13th-century manor house and farm of Cogges, represents farming and countryside history. The Witney and District Museum has many artefacts and documents representing the history of the town. Witney Blanket Hall, built in the 18th-century, showcases both the history of the Hall and of Witney's blanket industry and has Witney blankets for sale. The Wychwood Brewery has a museum open at weekends. 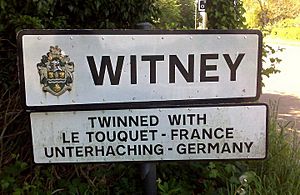 Witney is twinned with:

In July 2007 Witney saw its worst flooding in more than 50 years. Homes and businesses were evacuated and Bridge Street, a major road into the town and the only road across the Windrush, was closed. About 200 properties in central Witney were flooded, with areas around Bridge Street, Mill Street and West End the worst affected. The new and incomplete housing development Aquarius also suffered substantial flooding.

In 2008 further flooding contributed to the death of a 17-year-old boy who drowned in a culvert. 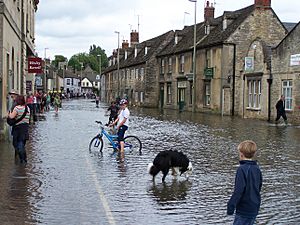 Witney has a maritime climate type typical to the British Isles, with evenly spread rainfall, a narrow temperature range, and comparatively low sunshine totals. The nearest official weather station is Brize Norton, just under 4 miles to the South West.

Rainfall averages slightly under 644mm per year with over 1mm of rain falling on just under 115 days of the year.

Famous people associated with Witney include:

All content from Kiddle encyclopedia articles (including the article images and facts) can be freely used under Attribution-ShareAlike license, unless stated otherwise. Cite this article:
Witney Facts for Kids. Kiddle Encyclopedia.