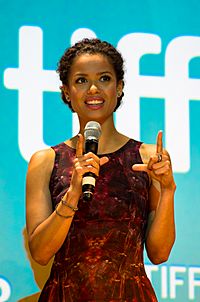 She starred as Tish Jones in the science-fiction series Doctor Who (2007). Her leading performance as the main character in Jessica Swale's 2015 play Nell Gwynn. She also appeared in Beauty and the Beast (2017), A Wrinkle in Time (2018), and Misbehaviour (2020).

All content from Kiddle encyclopedia articles (including the article images and facts) can be freely used under Attribution-ShareAlike license, unless stated otherwise. Cite this article:
Gugu Mbatha-Raw Facts for Kids. Kiddle Encyclopedia.