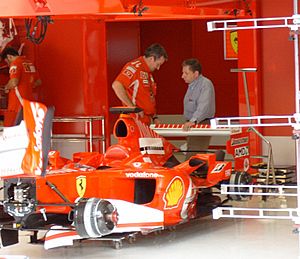 Nigel Stepney and Jean Todt at the 2005 Italian Grand Prix

Nigel Stepney (14 November 1958 – 2 May 2014) was a British Formula One mechanic. He was the team manager and chief mechanic of JRM Racing, in the FIA World Endurance Championship.

He started in Formula One as a mechanic at Shadow in 1977, then followed Elio de Angelis to Team Lotus before moving to Benetton for the late 1980s and early 90s. He worked with Scuderia Ferrari with Michael Schumacher, Rory Byrne and Ross Brawn.

All content from Kiddle encyclopedia articles (including the article images and facts) can be freely used under Attribution-ShareAlike license, unless stated otherwise. Cite this article:
Nigel Stepney Facts for Kids. Kiddle Encyclopedia.