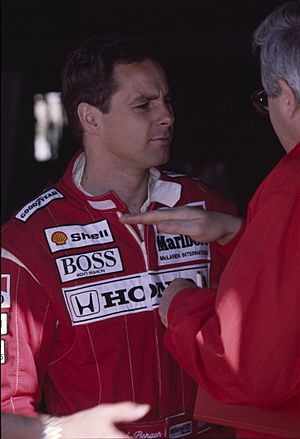 Gerhard Berger, (born August 27, 1959 in Wörgl) is an Austrian former Formula One racing driver, who used to own 50% of the Scuderia Toro Rosso Formula One team until he sold his share back to energy drink owner Dietrich Mateschitz.

All content from Kiddle encyclopedia articles (including the article images and facts) can be freely used under Attribution-ShareAlike license, unless stated otherwise. Cite this article:
Gerhard Berger Facts for Kids. Kiddle Encyclopedia.