The Canadian Grand Prix (known in French as the Grand Prix du Canada) is an auto race held in Canada since 1961. It has been part of the Formula One World Championship since 1967. It was first staged at Mosport Park in Bowmanville, Ontario as a sports car event before it alternated between Mosport and Circuit Mont-Tremblant, Quebec after Formula One took over the event. After 1971 safety concerns led to the Grand Prix moving permanently to Mosport. In 1978 the Canadian Grand Prix moved to its current home on Circuit Île Notre-Dame in Montreal. In 1982, the track was renamed to Circuit Gilles Villeneuve. This was to honour Canadian Formula One driver Gilles Villeneuve, following his death in 1982.

Active drivers are in bold

Active Formula One constructors are in bold. 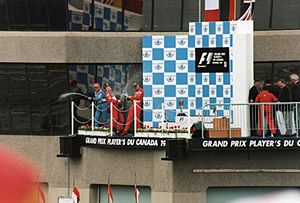 G. Fisichella, M. Schumacher and E. Irvine on the podium of the 1998 Canadian Grand Prix.

Active teams are in bold.

A pink background indicates an event which was not part of the Formula One World Championship.

All content from Kiddle encyclopedia articles (including the article images and facts) can be freely used under Attribution-ShareAlike license, unless stated otherwise. Cite this article:
Canadian Grand Prix Facts for Kids. Kiddle Encyclopedia.