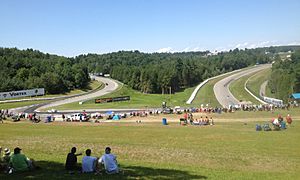 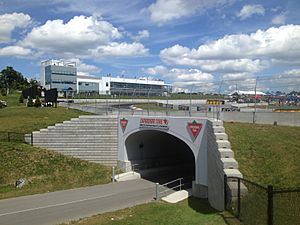 The track was designed and built in the late 1950s. The first race to be held on the track was a local event organized by the Oakville Light Car Club in June 1961. Shortly thereafter, on June 25, the venue held its first major race, the Player's 200, a sports car race bringing drivers from the world over to rural Ontario. Stirling Moss won the two-heat event in a Lotus 19. Second was Joakim Bonnier with Olivier Gendebien third. The proposed hairpin was expanded into two discrete corners, to be of greater challenge to the drivers and more interesting for the spectators, at his suggestion, and is named Moss Corner in his honour. This is a source of lingering confusion as many people call the track Mossport. Unlike many historic motorsport venues, Mosport's track layout has remained mostly unchanged from its original form.

For 2001, the entire circuit was repaved to meet FIA specifications, and is now 12.8 m (42 ft) wide. Drivers were consulted to ensure the character of the "old" track was kept; almost all the "racing lines" have been maintained.

Mosport achieved acclaim through a series of international sports car races under the title "Canadian Grand Prix" normally reserved for Formula 1 races. Many events were wildly popular, breaking Canadian sports attendance records with each successive race. The success of these races led Mosport to be seen as a key component in the founding of the Can Am Series.

The CanAm first visited the track in its inaugural season in 1966, and Mosport hosted at least one event in every year of the series' history, except 1968. In 1967, Canada's centennial year, Mosport hosted Formula One, USAC, and a 500cc Motorcycle Grand Prix. F1's Grand Prix of Canada remained at the track until 1977, until it was moved to Montreal. Mosport has hosted a wide variety of series throughout its history. The circuit has held Formula One, USAC, World Sportscar Championship, Can-Am, Formula 5000, and many other sports car, open-wheel, and motorcycle series.

Mosport has had several fatalities, both track crew, drivers, and riders, the most recognized being German Formula One driver Manfred Winkelhock who was killed in 1985 when his Porsche 962C crashed into a concrete wall. [1] Another fatality at the track was in 2008 during the 29th annual Vintage Automobile Racing Association of Canada Racing Festival. Driver Dino Crescentini of Rochester Hills, MI – a ten-year veteran of vintage racing – lost control of his 1977 Wolf Dallara Can-Am car, which previously had been driven by Gilles Villeneuve. The most recent fatality was in 2018 when 61 year old former Pro Mazda driver Jeff Green speared off the racetrack at turn 8, and slammed into the barrier. He was attended to quickly but was unable to survive the crash.

The fastest ever recorded lap was taken by Rinaldo Capello, in an Audi R10 TDI, in qualifying for the 2008 Grand Prix of Mosport, with a time of 1:04.094. The lap record was set in the race for that meeting with Capello's Audi Sport North America teammate Marco Werner lapping in a time of 1:05.823.

Mosport has had a succession of owners since the original public company created to build the track. Two of those prior owners, Norm Namerow (who owned the track through his publishing company, CanTrack, until his death) and Harvey Hudes, have both been inducted into the Canadian Motorsport Hall of Fame for their contribution to the sport in Canada. In 1998, Panoz Motorsports purchased the facility, and in 1999, the newly formed American Le Mans Series visited Mosport for the first time. 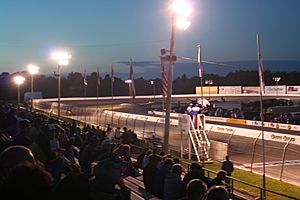 The oval was constructed in 1989 as a dirt track originally called Mosport's Ascot North, named after the famous Ascot Park track in Gardena, California. The first event was scheduled in July 1989 and was to feature USAC Midgets and Sprint Cars and the World of Outlaws. The races were cancelled after the initial heat races caused deep ruts in the corners and dislodging stones hidden under the clay.

The park announced the closing of the oval in July 2013 to accommodate the expansion of the Driver Development Centre. 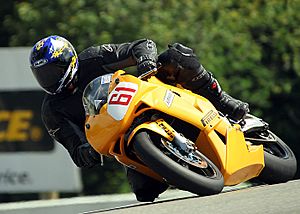 A motorcycle racer at Mosport

It was announced in September 2013 that Canadian Tire Motorsports Park was chosen to host an annual round of the IMSA United SportsCar Championship beginning in 2014. The new series replaced the American Le Mans Series as the feature race during the tracks annual SportsCar Grand Prix, which is Canada's largest annual sportscar race.

The NASCAR Camping World Truck Series began racing at Canadian Tire Motorsport Park in September 2013, marking the first time the series has raced in Canada. Chevrolet was announced as the title sponsor and the race is known as the Chevrolet Silverado 250.

The NASCAR Pinty's Series has visited the facility at least twice annually every year since its inaugural season in 2007. Currently the race is known as the Clarington 200 and takes place during the tracks Victoria Day SpeedFest Weekend and its Chevrolet Silverado 250 weekend.

Mosport has also been the venue of a number of concerts and music festivals such as:

All content from Kiddle encyclopedia articles (including the article images and facts) can be freely used under Attribution-ShareAlike license, unless stated otherwise. Cite this article:
Canadian Tire Motorsport Park Facts for Kids. Kiddle Encyclopedia.