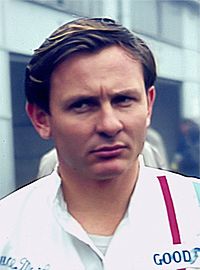 Bruce Leslie McLaren (30 August 1937 – 2 June 1970) was a race-car designer, driver, engineer and inventor. he was born on 30 August 1937 Auckland, New Zealand. Bruce McLaren was the founder of the company McLaren. As a child Bruce McLaren was interested in vehicles. While growing up he spent all of his spare time in his parents workshop, around all the vehicles. Over time Bruce McLaren developed his interest on vehicles. Bruces parents Les McLaren and Ruth Mclaren owned a service station in Remura Rd, Remura. Les McLaren had been interested in motorcycles and had, had an injury before Bruce was born, which put an end to his motorcycling hobby.

in 1952 young bruce was only 14 and had entered his first race in an Austin 7 Ulster. It was a hillclimb. Two years later he took part in a proper race in a Ford 10.

Bruce McLaren died while testing out one of his cars. The car had no wing causing the car to flip and crash. The engine of the car rammed into Bruce McLaren. The car then went up in flames. All this happened at the Goodwood Circuit.

All content from Kiddle encyclopedia articles (including the article images and facts) can be freely used under Attribution-ShareAlike license, unless stated otherwise. Cite this article:
Bruce McLaren Facts for Kids. Kiddle Encyclopedia.