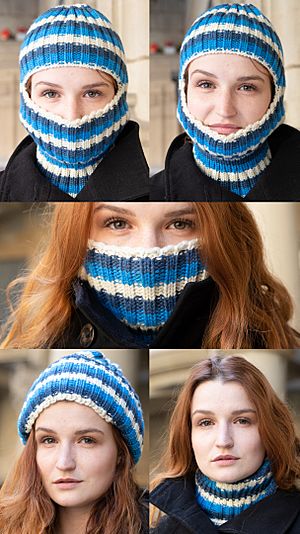 Different ways of wearing a balaclava 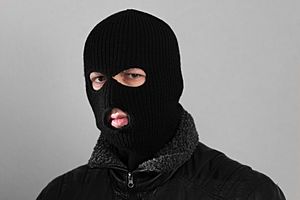 A balaclava, also known as a balaclava helmet or Bally (UK slang) or ski mask (US slang), is a form of cloth headgear designed to expose only part of the face, usually the eyes and mouth. Depending on style and how it is worn, only the eyes, mouth and nose, or just the front of the face are unprotected. Versions with a full face opening may be rolled into a hat to cover the crown of the head or folded down as a collar around the neck.

This type of headgear was known in the 19th century as an Uhlan cap or a Templar cap.

The name comes from their use at the Battle of Balaclava during the Crimean War of 1854, referring to the town near Sevastopol in the Crimea, where British troops there wore knitted headgear to keep warm. Handmade balaclavas were sent over to the British troops to help protect them from the bitter cold weather. British troops required this aid, as their own supplies (warm clothing, weatherproof quarters, and food) never arrived in time. According to Richard Rutt in his History of Handknitting, the name "balaclava helmet" was not used during the war but appears much later, in 1881. 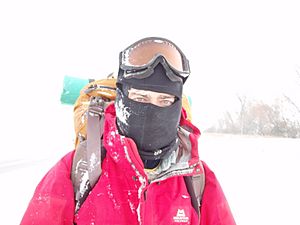 Balaclava worn during a snowstorm

Race drivers In Fédération Internationale de l'Automobile sanctioned events must wear balaclavas made of fire-retardant material underneath their crash helmets. In racing events, hill-climbs, special stages of rallies and selective sections of cross-country events entered on the International Sporting Calendar, all drivers and co-drivers must wear overalls as well as gloves (optional for co-drivers), long underwear, a balaclava, and shoes homologated to the FIA 8856-2000 standard. 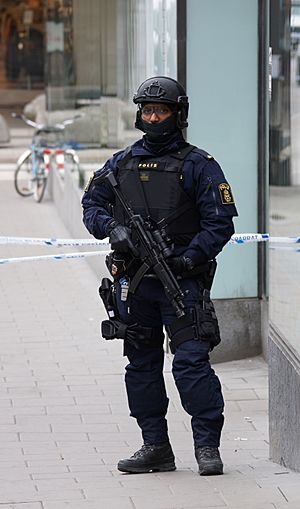 A Swedish police officer wearing a balaclava which masks his identity.

In the Indian subcontinent, balaclavas are commonly referred to as monkey caps because of their typical earth tone colours, and the fact that they blot out most human facial features. Monkey caps sometimes have a small, decorative, woollen pom-pom on top. They are commonly worn by troops on Himalayan duty for protection from the cold.

In the Soviet Union, the balaclava became a part of standard OMON (special police task force) uniform as early as the Perestroyka years of the late 1980s.

British Police in Kent confiscated a single copy of the War on Terror board game partly because of the inclusion of a balaclava. Police said it "could be used to conceal someone's identity or could be used in the course of a criminal act."

Balaclavas are often used by police battling drug cartels and gangs in Latin America to conceal their identity and protect their families.

All content from Kiddle encyclopedia articles (including the article images and facts) can be freely used under Attribution-ShareAlike license, unless stated otherwise. Cite this article:
Balaclava Facts for Kids. Kiddle Encyclopedia.