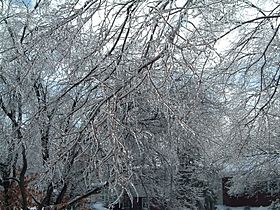 A Winter Storm in December 2004

Winter storms or snowstorms happen when warm, wet air meets with cold air. The warm, wet air mass and the cold air mass can each be 1000 km or more in diameter. Snowstorms affecting Northeastern United States often get their moisture from air moving north from the Gulf of Mexico and cold air from air masses coming down from the Arctic. In the Northwest United States warm, wet air from the Pacific Ocean cools when it is pushed upward by the mountains. Many different things can affect the direction of movement, moisture content and temperature of air masses. All of these differences affect the type and severity of the snowstorm.

Winter storms and blizzards can make several feet of snow that blow into big drifts. Sometimes the drifts can be over ten feet tall. They could even cover a house.

Lots of popular winter storms are part of North America's history. In 1846 the Donner Party traveled away by covered wagons from Illinois headed for Sutter's Fort near Sacramento, California. As an answer of bad decisions and slow going, they tried to go across the big Sierra Nevada Mountains in the late October. Usually, California is still warm at that time of the year. As the party crossed the Sierra Nevada Mountains, they did not see any snow and was not worried. However, after they left, a huge snowstorm hit. The party was forced to camp near Truckee, California. The snow was so deep that the wagon wheels became stuck, so they could not move anyplace. They tried to wait the storm out, but when one blizzard ended, another began immediately before they had time to escape. Their food became short, so some of the people decided to hike out and find help rather than to starve to death. Most of them died in the freezing weather, and many of those who stayed behind in the camp survived. Of the 87 people who started in Illinois, only 47 lived.

All content from Kiddle encyclopedia articles (including the article images and facts) can be freely used under Attribution-ShareAlike license, unless stated otherwise. Cite this article:
Winter storm Facts for Kids. Kiddle Encyclopedia.