Jenson Alexander Lyons Button MBE (born 19 January 1980) is a British racing driver and former Formula One driver. He won the 2009 FIA Formula One World Championship, driving for Brawn GP. Button announced in September 2016 that he would be giving up his seat at the end of the 2016 season but remained at McLaren as a reserve driver and ambassador of McLaren until 2018. He currently competes in the Japanese Super GT Series, driving for Team Kunimitsu. 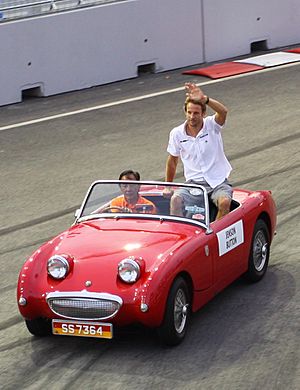 Button enjoyed racing from an early age, racing his BMX bike with friends after school, he began karting at the Clay Pigeon Raceway at the age of eight, after his father bought him his first kart, and made an extraordinarily successful start. In 1989, aged nine, he came first in the British Super Prix. He won all 34 races of the 1991 British Cadet Kart Championship, along with the title with team Wright karts. Further successes followed, including three triumphs in the British Open Kart Championship.

In 1997, he won the Ayrton Senna Memorial Cup, and also became the youngest driver ever to win the European Super A Championship. Aged 18, Button moved into car racing, winning the British Formula Ford Championship with Haywood Racing; he also triumphed in the Formula Ford Festival at Brands Hatch. At the end of 1998, he won the annual McLaren Autosport BRDC Young Driver Award. 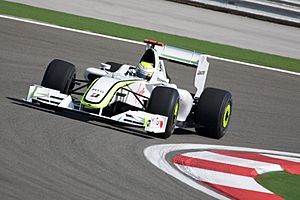 Button driving for Brawn at the 2009 Turkish Grand Prix, his final victory of the season

In 2000, Button joined the BMW WilliamsF1 Team at the age of 20, with Ralf Schumacher. He became the youngest driver to score a point at the Brazilian Grand Prix. He scored points six times during 2000, his highest place finish being in Germany where he finished fourth. His highest place on the grid for the start of the race was 3rd position in Belgium. He finished 8th in the championship.

In 2001, he changed teams to the Benetton team, and raced alongside Giancarlo Fisichella. He did not have much success. His best finish was 5th place at Hockenheim. Some people thought that Button would move teams because of his bad results, but stayed at the team for 2002, which was now called Renault. 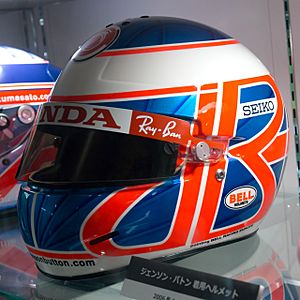 Like many Formula One drivers, Button resides in the area of Monaco, although he did live in Guernsey for 18 months before returning to Monaco in 2012. He also has properties in the UK and Bahrain. His hobbies include mountain biking, competing in triathlons and body boarding, and his car collection includes a Nissan GT-R, a 1956 VW Campervan, a Honda S600 and a Mercedes C63 AMG, a McLaren 675LT Spider, McLaren P1, numerous Ferraris and his championship winning Brawn BGP 001.

Button is also involved in charitable work through the creation of The Jenson Button Trust. Established in March 2010, the Trust provides donations to a number of charitable causes. Each year the Trust will select and nominate charitable beneficiaries to which the funds will be distributed.

On 18 October 2015, Button won a triathlon competition at Hermosa Beach, California. On 8 December 2016 Button was awarded an honorary doctorate in engineering from the University of Bath.

All content from Kiddle encyclopedia articles (including the article images and facts) can be freely used under Attribution-ShareAlike license, unless stated otherwise. Cite this article:
Jenson Button Facts for Kids. Kiddle Encyclopedia.