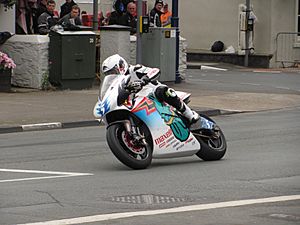 Bruce Anstey on board the Team Mugen Shinden San at Parliament Square, Ramsey

Mugen Motorsports (M-TEC Co., Ltd) (無限) is a Japanese company. It was formed in 1973 by Hirotoshi Honda and Masao Kimura. Hirotoshi Honda is the son of Honda Motor Company founder Soichiro Honda. Mugen is an engine tuner (performance improvement) and parts builder. They are closely linked with Honda. Mugen has never been owned by Honda. Mugen means "Without Limit", or "Unlimited". It is common to placed word "Power" after Mugen to say "Unlimited Power".

The company tunes and races Honda vehicles in the Super GT championship. They also sell parts to amateur racers. Mugen was involved in Formula 3000 championships in 1990 and 1991. This led Mugen to join Formula One. They supplied engines from 1992 to 2000. They also supplied the only engines for Formula Nippon from 1996 until 2005.

In 1986, Formula 3000 was introduced into Japan. Mugen joined with Honda to build an F3000 engine. It was introduced in the 1987 season and leased to 14 teams. In 1988, Mugen won four of the top five places in the Japanese F3000 championship. In 1989, Mugen entered European F3000 with the MF308 engine. They won the championship with Jean Alesi driving a Reynard. The same year the company produced its own prototype 3.5 L V8 Formula One engine, codenamed MF350.

In 1988, Mugen started tuning Honda engines for use in Formula Three. They won the Japanese series with Akihiko Nakaya, and in 1990 expanded to Europe. Mugen won its first Formula Three championships in Europe. They took the French title with Eric Hélary, and the British crown with Mika Häkkinen. They also won the title in 1991 with Rubens Barrichello.

Mugen supplied Honda-derived engines to the Jordan Formula One team between 1998 and 2000.

In 1994, Mugen moved to Team Lotus with the new Lotus 109. The team was underfunded and the 109 chassis was late arriving. The car and its engine was scored a single point. At the end of the year, Lotus closed down.

Ligier was taken over by Alain Prost in 1997, and renamed Prost Grand Prix. When Prost changed Peugeot engines in 1998, Mugen reached a two-year agreement with Jordan Grand Prix. The 1998 season saw a 1-2 finish at Spa-Francorchamps with Damon Hill and Ralf Schumacher.

In 1999, Heinz-Harald Frentzen won twice and Jorden finished the constuctors championship in third place. In 2000, the Honda Motor Company announced that it would be returning for Formula One. Honda would supply its own engines in 2000 with British American Racing. At the end of the 2000 season, Mugen pulled out of F1.

In 2001, in the JGTC, the Mugen NSX won two races. In June, the company announced the a new 4.0 L V8. The MF408S was built for the main prototype class in the 24 Hours of Le Mans and American Le Mans Series.

As an engine supplier

All content from Kiddle encyclopedia articles (including the article images and facts) can be freely used under Attribution-ShareAlike license, unless stated otherwise. Cite this article:
Mugen Motorsports Facts for Kids. Kiddle Encyclopedia.