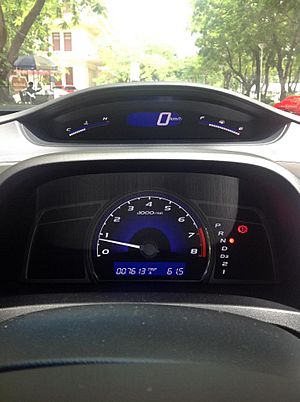 The Honda Civic is a subcompact and compact car that is built by the Honda company. The Civic has had 10 generations. The Honda Civic has been built and sold since 1972. The Chevrolet Vega and Ford Pinto were rolling sacrifices amid an international fuel crisis, but the small and efficient Civic felt like perfect timing. Honda offered the first-gen Civic as both a three-door hatchback and sedan. The sedan version essentially was exactly like the hatchback, except that the conventional trunklid and fixed rear seat of the sedan were replaced by an upward-hinged rear window and fold-down seat in the hatchback. Wheels were 12 inches in diameter, and radial tires, A/C, a two-speed automatic transmission, and a rear hatch wiper were the only options. The 8th and later generation Civics have a digital speedometer. The Civic DX, LX, LX-S / Sport, and EX are available with an automatic or manual transmission. The highest trim levels are the Civic Si and Type R, which are only available with a manual transmission and come with a more powerful engine. The Acura CSX, sold only in Canada, is based on and nearly identical to the eighth generation (2006-2011) Civic.

All content from Kiddle encyclopedia articles (including the article images and facts) can be freely used under Attribution-ShareAlike license, unless stated otherwise. Cite this article:
Honda Civic Facts for Kids. Kiddle Encyclopedia.