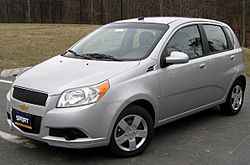 A subcompact car is the American term for an automobile with a class size smaller than a compact car. Usually they are not longer than 165 inches (4,191 mm). They are larger than a microcar. According to the United States Environmental Protection Agency (EPA), a passenger car is classified as subcompact if it has between 85 cubic feet (2,407 L) and 99 cu ft (2,803 L) of interior volume.

The subcompact group is roughly the same as A-segment and B-segment cars in Europe. They also are similar in size to a city car and supermini in British terminology. In 2012, the New York Times described the differences, saying "today’s small cars actually span three main segments in the global vehicle market". The tiny A-segment cars include the Chevrolet Spark and Smart Fortwo. They’re extremely short and very light. Slightly larger are B-segment cars like the Ford Fiesta and Chevrolet Sonic. The most popular subcompact cars include the Chevrolet Sonic/Aveo and the Ford Fiesta.

All content from Kiddle encyclopedia articles (including the article images and facts) can be freely used under Attribution-ShareAlike license, unless stated otherwise. Cite this article:
Subcompact car Facts for Kids. Kiddle Encyclopedia.