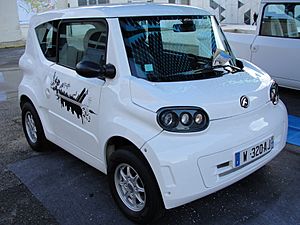 City car is a term used for an automobile that is shorter than a typical subcompact car, in the A-segment group. They're also referred to as an urban car because they're intended for short distances. The most common city cars are the Chevrolet Spark and Ford Ka (only sold outside the US).

All content from Kiddle encyclopedia articles (including the article images and facts) can be freely used under Attribution-ShareAlike license, unless stated otherwise. Cite this article:
City car Facts for Kids. Kiddle Encyclopedia.