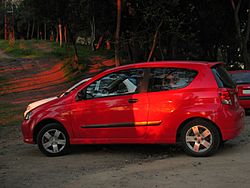 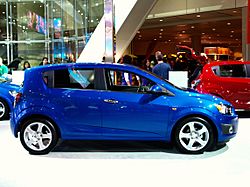 The car was first sold as the Daewoo Kalos from 1999-2002. It was later sold as a Chevrolet model when General Motors bought the company. Chevrolet replaced the Suzuki based Metro with this car. In 2004 it was sold by Pontiac, Chevrolet, Suzuki and Holden. In other countries different names were used. These include the Chevrolet Kalos, Chevrolet Lova, ZAZ Vida and Pontiac G3. In 2005 a freshened sedan was introduced, this time made by fellow GM automaker Adam Opel AG. This was followed by a Malibu-based hatchback. In 2012 the second generation Aveo was renamed the Sonic. The sonic has several design changes. The Chevrolet Sonic name is used in North America. The same design is sold as the Holden Barina in Australasia. However, the car is still sold as Aveo in other parts of the world.

All content from Kiddle encyclopedia articles (including the article images and facts) can be freely used under Attribution-ShareAlike license, unless stated otherwise. Cite this article:
Chevrolet Aveo Facts for Kids. Kiddle Encyclopedia.