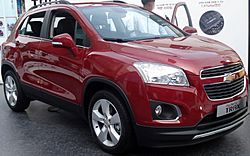 Chevrolet Trax is a subcompact CUV/mini SUV (Europe) sold by the Chevrolet division by General Motors. It was introduced in 2013. It replaced both the Chevrolet HHR station wagon and the Suzuki based Tracker subcompact SUV. It is a mere rebadged version of Opel Mokka, which is also offered in the U.S. as Buick Encore. It is built on GM's Gamma platform. The Gamma platform is also used to built the Sonic and the Spark. In 2014 it replaced the Chevrolet Captiva Sport as GM's fleet car. GM has thought of selling a GMC version of this vehicle due to sales success in the U.S.

All content from Kiddle encyclopedia articles (including the article images and facts) can be freely used under Attribution-ShareAlike license, unless stated otherwise. Cite this article:
Chevrolet Trax Facts for Kids. Kiddle Encyclopedia.