Circuit of the Americas facts for kids 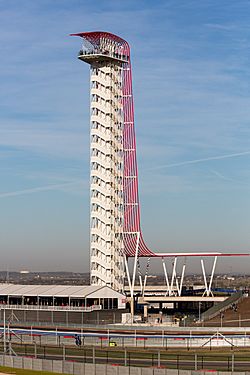 Circuit of The Americas (COTA) is a grade 1 FIA specification 3.427-mile (5.515 km) motor racing facility located in Elroy, on the southeastern periphery of Austin city limits, in Central Texas. The circuit has FIA Grade 1 license.

The circuit hosts the United States Grand Prix. Starting in 2013, it will host MotoGP races. It will also host a round of V8 Supercars, an Australia-based touring car racing series, starting in 2013.

The circuit was one of only a handful on the Formula One 2012 calendar to be run counter-clockwise. Because of this, the circuit contains more left-hand turns than right-hand ones, placing greater physical demands on the drivers whose bodies, particularly their necks, are more adapted to the lateral g-forces of clockwise circuits.

Bordered by the track on three sides, the Grand Plaza is a 20 acres (0.081 km2) space designed by Miró Rivera Architects of Austin, Texas that includes a large reflecting pool, lawn, and varying landscape zones. A promenade along the north side of the Grand Plaza hosts concessions, retail, restroom facilities, and entrances to spectator seating. From the southeast end of the Grand Plaza, two pedestrian bridges cross over turns 16 and 3 to provide access for visitors to other areas of the circuit complex.

Circuit of the Americas features a 251 feet (77 m) observation tower. The structure of the tower consists of an elevator hoist-way surrounded by a double helix staircase of 419 stairs, both of which lead to an observation platform 230 feet (70 m) above ground level. The platform provides a 360-degree panorama of the circuit, as well as views to downtown Austin, Texas. The observation platform, which is accessible to the public for an admission fee, can accommodate up to 70 visitors and features glass railings and a partial glass floor.

All content from Kiddle encyclopedia articles (including the article images and facts) can be freely used under Attribution-ShareAlike license, unless stated otherwise. Cite this article:
Circuit of the Americas Facts for Kids. Kiddle Encyclopedia.