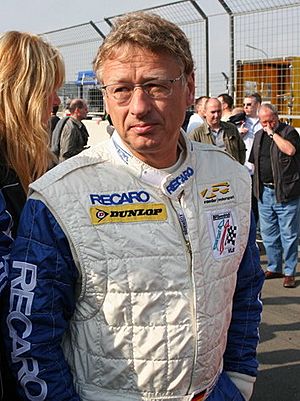 Hermann Tilke (born December 31, 1954 in Olpe German) is an architect and designer of Formula One motor racing circuits. He is also an auto racer.

During the 1980s, Tilke competed in touring car racing. Most of his racing was on the old Nürburgring Nordschleife circuit. He also competed in VLN endurance racing and 24 Hours Nürburgring. He and Dirk Adorf won some VLN races with a V8Star Series in 2003 and 2004.

His first large job was in Austria, in the 1990s. He made a major redesign of the fast Österreichring, and created the much shorter A1-Ring.

Tilke made changes to many established F1 circuits. Because of this, Tilke was able to earn the contracts to design many of new new, high-profile circuits from scratch.

Tilke's trademark of circuit design is a mixture long straight and tight hairpins. These are intended to encourage overtaking.

Tilke's circuits have been criticized for producing uninteresting races. He has been accused of "slowly killing" Formula One.

Tilke has design many high-profile new world circuits from scratch. These include:

All content from Kiddle encyclopedia articles (including the article images and facts) can be freely used under Attribution-ShareAlike license, unless stated otherwise. Cite this article:
Hermann Tilke Facts for Kids. Kiddle Encyclopedia.