Kids Encyclopedia Facts
Not to be confused with Atlanta Motor Speedway. 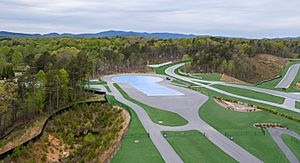 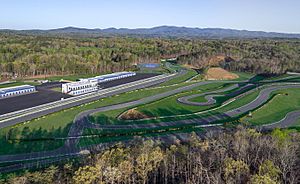 Picture of the straight, turns 16 to 8 and part of the kart circuit

Jeremy W. Porter is the creator and CEO of Atlanta Motorsports Park. Porter began as a driver in Formula ICC kart racing and went on to win two consecutive Southeastern Points Championships. Jeremy Porter saw the business potential in creating his own track; consequently, AMP was created.

The first official race at AMP was the Inaugural ChumpCar World Series Race in November 2013. 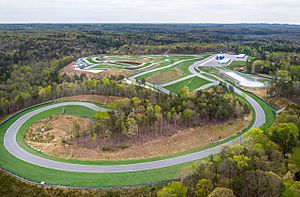 Picture of circuit from turns 12 to 15 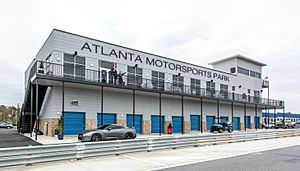 AMP's road circuit consists of a two mile long track that was designed by Formula One track architect Hermann Tilke. The track consists of 16 turns and 98 feet of elevation changes throughout the course. To accommodate all driver skill levels, the circuit can be configured in several different ways and can host up to three simultaneous events. Two famous corners have also been incorporated into the track: Spa-Francorchamp's corner of Eau Rouge and the famous Carousel corner from Germany's Nürburgring track.

AMP's kart circuit is a 0.85 mi (1.368 km) long track that can be divided into four separate tracks and allows up to three simultaneous events at once. The track was built to meet CIK Level A standards and the full course has 43 feet of elevation changes. It is known around the world to have the most radical elevation changes of any kart track in the world.

In 2013 AMP was featured on an episode of MotoMan when George J. Notaras (MotoMan) interviewed the Vice President of Marketing for Cadillac, Don Butler, and drove a Cadillac ATS around the track.

Motor trend's Wide Open Throttle drove and reviewed the 2013 Cadillac ATS at the road circuit where the article and video was then posted on July 26, 2012.

A commercial for the Ford Escape EcoBoost challenge that aired in March 2013 was filmed at the road circuit.

CNN Money filmed a segment at the road circuit on the Aston Martin Rapide S that aired in June 2013.

AMP was also a part of Taste of Speed's Rally For CURE 2013, a charity driving event that started at Ferrari Maserati of Atlanta and ended at Atlanta Motorsports Park. The event was created to raise money for CURE Childhood Cancer, 2013 was its inaugural year.

All content from Kiddle encyclopedia articles (including the article images and facts) can be freely used under Attribution-ShareAlike license, unless stated otherwise. Cite this article:
Atlanta Motorsports Park Facts for Kids. Kiddle Encyclopedia.