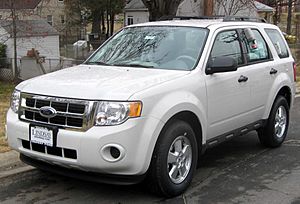 The Ford Escape is a compact crossover SUV that is manufactured by the Ford Motor Company. It was introduced during 2000 as a 2001 model year SUV. The Ford Escape is also available in a hybrid version. The current Escape is actually a European based model that is sold in Europe as the Ford Kuga (not to be confused with the similar sounding Cougar)

All content from Kiddle encyclopedia articles (including the article images and facts) can be freely used under Attribution-ShareAlike license, unless stated otherwise. Cite this article:
Ford Escape Facts for Kids. Kiddle Encyclopedia.