Almaty (Kazakh: Алматы; formerly known as Alma-Ata (Алма-Ата), also Verniy, (Верный)) is the largest city in Kazakhstan. It has a population of over 1,700,000 people (as of 2015). Eight percent of the population of the country live in Almaty. It was the capital of Kazakhstan from 1927 to 1998. Although it is not the capital today, Almaty is still the major commercial center of Kazakhstan.

The city is close to China, and was once on the northern silk route between China and the Middle East. Its name derives from the Turkic languages.

The city is in an earthquake zone. There have been three quite serious earthquakes in the last 150 years.

On 4 February 1854 the Russian Empire decided to build a fort Verniy on the west bank of the Malaya Almatinka river. Later Russian settlers arrived. In 1922 the Soviet Union renamed the city to Alma-Ata. In 1927 Alma-Ata became the capital of the Kazakh SSR.

Almaty has a hot-summer humid continental climate (Dfa in the Koeppen climate classification).

The name "Almaty" comes from the Kazakh word for "apple" (алма). The name is often translated as a city "rich with apples". The older Soviet-era Russian name for the city, Alma-Ata, comes from a mistake (the name literally means "Grandfather of apples"). In the area around Almaty, there are many different species of the wild apples. The region is thought to be the ancestral home of the apple. A local species of apple, the wild Malus sieversii, may be the ancestor of the modern domestic apple. 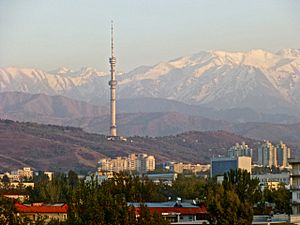 All content from Kiddle encyclopedia articles (including the article images and facts) can be freely used under Attribution-ShareAlike license, unless stated otherwise. Cite this article:
Almaty Facts for Kids. Kiddle Encyclopedia.