The Circuit de Catalunya is a racetrack in Montmeló, to the north of Barcelona, Catalonia. It is home to the Formula One Spanish Grand Prix and the motorcycle Catalonia Grand Prix. With long straights and a variety of corners, the Circuit de Catalunya is seen as an all-rounder circuit. It is often used for off-season testing. The track has stands with a capacity of 140,700. The circuit has FIA Grade 1 license.

The Circuit de Barcelona-Catalunya was built in 1991 and began hosting the Spanish Grand Prix that same year. Construction also coincided with the Olympic Games scheduled to take place in Barcelona the next year, where the circuit acted as the start and finish line for the road team time trial cycling event.

When first used, overtaking was frequent as cars could follow closely through the last two corners and slipstream down the long straight. As aerodynamic balance became more critical, this overtaking method drastically decreased as the cars were unable to follow each other through the fast final corner due to turbulence created by the leading car. The 2007 season saw the first of the two final sweepers replaced with a slow chicane in an effort to improve overtaking. However, the redesign has not yet shown any effect. 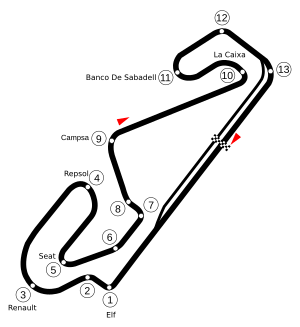 Track layout before the chicane was added in 2007.

The Circuit de Catalunya also plays host to many other racing series, including Moto GP. The chicane which was put in for Formula 1 does not exist in the track layout for Moto GP, and there are at least five points on the track where riders are known to pass. As in Formula 1, turn one is the most popular place for overtaking. 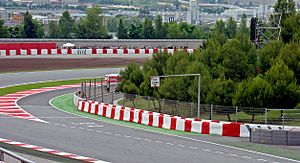 The wind direction at the circuit can change drastically during the day, a significant factor given the importance of aerodynamics to modern Formula One cars. It is then hard to find a good setup since cars can have massive aerodynamic drag and under-steer on one part of the circuit in the morning, but suffer over-steer at the same part of the circuit in the afternoon. A given tire compound can work well when tested, but not so well a couple of months later. These changeable conditions can make for unexpected performances from some teams during the race. The changeable wind conditions have also caused accidents at the circuit, with Fernando Alonso's testing accident in 2015 partly blamed on the severity of the wind. 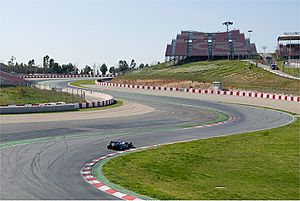 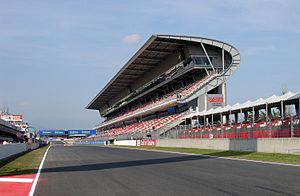 The circuit has been the site of some memorable moments. In 1991, Ayrton Senna and Nigel Mansell went down the entire front straight side-by-side while dueling for second place, with Mansell eventually taking the position and ultimately the race itself. In 1994, Michael Schumacher managed to finish in second place despite driving over half the race with only fifth gear. In 1996, Schumacher took his first win as a Ferrari driver, after a dominant performance during a torrential rainstorm. The 1999 race was notable as there was only one reported overtaking move during the race. In 2001, Mika Häkkinen suffered a clutch failure while leading the race on the last lap, handing the win to Schumacher. At the 2006 event, Fernando Alonso became the first Spanish Formula One driver to win at his home country's track.

In 2008, Heikki Kovalainen left the track at 240 km/h (149 mph) after a wheel rim failure at turn 9. He managed to decelerate to 130 km/h (81 mph) when he hit the tyre barrier. He was temporarily unconscious and suffered a minor concussion, but a few minutes later, spectators were relieved when he gave a thumbs up.

At the 2009 motorcycle Grand Prix, teammates Valentino Rossi and Jorge Lorenzo fought all race long for first place, culminating in an overtake on the final corner by Rossi. Riders and pundits described the race as "historic" and "genius".

All content from Kiddle encyclopedia articles (including the article images and facts) can be freely used under Attribution-ShareAlike license, unless stated otherwise. Cite this article:
Circuit de Catalunya Facts for Kids. Kiddle Encyclopedia.