Fuji Speedway (富士スピードウェイcode: ja is deprecated , Fuji Supīdowei) is a race track standing in the foothills of Mount Fuji, in Oyama, Suntō District, Shizuoka Prefecture, Japan. It was built in the early 1960s and hosted the first Formula One race in Japan in 1976. In the 1980s, Fuji Speedway was used for the FIA World Sportscar Championship and national racing. When it first opened, it was managed by Mitsubishi. Fuji Speedway was purchased by Toyota Motor Corporation in 2000. Fuji Speedway is known for having one of the longest straights in motorsport tracks, at 1.5 km (0.93 mi) in length. 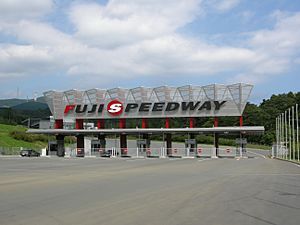 Main gate of the circuit

Fuji Speedway Corporation was established in 1963, as Japan NASCAR Corporation. At first, the circuit was planned to hold NASCAR-style races in Japan. The track was designed to be a 4 km (2.5 mi) high-banked superspeedway. There was not enough money to complete the project and only one of the banked turns was ever designed. Mitsubishi Estate Co. (a part of Mitsubishi) invested in the circuit. They took over the management rights on October 1965.

The track was converted to a road course. Fuji speedway opened in December 1965. The banked turn was somewhat dangerous, and caused several major accidents. According to Vic Elford "The reason that banking was so horrific, was that at the end of the straight we went over a blind crest at around 190/200 mph and dropped into the banking. At other tracks (Daytona, Monthlery, etc.) you climb up the banking."

A new part of track was built to fix the problem. The new 4.359 km (2.709 mi) course was more successful. In 1966, the track hosted a USAC Indy Car non-championship race, won by Jackie Stewart. The speedway brought the first Formula One race to Japan at the end of the 1976 season. Mario Andretti won the race, and James Hunt earned enough points to win the world championship title.

In 1977 Gilles Villeneuve was involved in a crash that killed two spectators on the side of the track. Formula One stopped racing at the speedway and Japan. When Japan was added back to the F1 schedule ten years later, it went to Suzuka instead. F1 didn't return to Fuji until 2007. 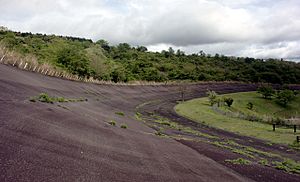 The abandoned "30° Bank" of the old track

Fuji remained a popular sports car racing venue. FIA World Sportscar Championship visited the track between 1982–1988. Fuji was often used for national races. Two chicanes were added to the track to slow down the speeds. Even with these changes, the main feature of the track remained its long 1.5 km (0.93 mi) straight, one of the longest in all of motorsports.

The long pit straight has also been used for drag racing. NHRA exhibitions were run in 1989. Local drag races are common on the circuit.

The track is still used for Japanese national races. In 2000 the majority of the shares of stock were bought by Toyota. Toyota was making plans for future motor racing.

In 2003 the circuit was closed to for a major reprofiling of the track. A new design from Hermann Tilke was used. The circuit reopened on 10 April 2005. It hosted its first Formula One championship event in 29 years on 30 September 2007. The race won by Lewis Hamilton. 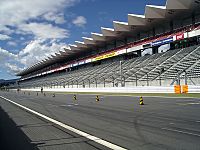 Rebuilt grandstand in the 2000s

The circuit hosts the NISMO Festival for historic Nissan racers. Toyota also hosts its own historic event a week before the NISMO called Toyota Motorsports Festival. Nearby is a drifting course, which was built as part of the refurbishment.

As part of the 2003 renovations, most of the old banked section of track was removed. Only a small section remains.

Following both poor ticket sales and bad weather it was decided by FOM that the Japanese Grand Prix would be shared between Fuji Speedway and Suzuka on alternate years. Suzuka would hold the next race on 4 October 2009. After the global recession and its own financial problems, Toyota decided to stop hosting of Japanese Grand Prix.

The Fuji circuit is known to fans of the arcade racing game Pole Position, as cars raced on the circuit.

The Fuji circuit is featured prominently in the Japanese television drama Engine as the main setting for the racing scenes. It is also the home of the (fictional) "Regulus Cup".

All content from Kiddle encyclopedia articles (including the article images and facts) can be freely used under Attribution-ShareAlike license, unless stated otherwise. Cite this article:
Fuji Speedway Facts for Kids. Kiddle Encyclopedia.