Designed as a Honda test track in 1962 by John Hugenholtz, Suzuka is one of few circuits in the world to have a figure 8 layout. The track doesn't actually intersect with itself. The back straight passes over the front section by means of an bridge. 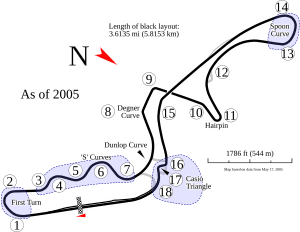 The circuit closed for a year to make renovations. They needed to make the track comply with Formula One requirements for 2009. The last major event held on 18 November 2007. The track held a re-opening day on 12 April 2009. 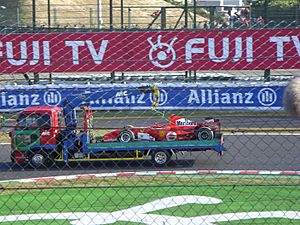 NASCAR organized the NASCAR Thunder 100, a pair of exhibition 100-lap races on the East Circuit. The races were held in 1996 and 1997. The 1.4 miles (2.3 km) layout which using the pit straight and S-corners, before rejoining the main circuit near the Casio Triangle. The cars were from the Sprint Cup Series (then called Winston Cup) and Camping World West Series (then called Winston West). The field was by invitation for the two races, and the field included several Japanese and Australian drivers. The 1996 event was marred by tragedy when pace car driver Elmo Langley died of a heart attack during practice. During qualifying for the 1997 race, rain caused Goodyear to use rain tyres on the Sprint Cup cars. This was the first time in NASCAR's modern era (which started in 1972) that race cars used rain tyres.

It was announced on 21 June 2010 that Suzuka Circuit would host the Japan round of the 2011 World Touring Car Championship season instead of the Okayama International Circuit. 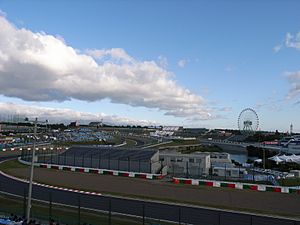 Following two bad accidents in 2002 and 2003, safety has been a concern at the circuit's 130R corner. 130R is a 130 metres (427 ft) radius turn starting past the Crossover. 130R has been compared to Spa's Eau Rouge. In 2002, Toyota driver Allan McNish suffered a high-speed crash through the bump. The crash sent him through a metal fence. He was not seriously injured.

Track officials redesigned the corner. They made it a double-apex (two smaller turns in one corner) section. One apex had a 85 metres (279 ft) radius, and the second had a 340 metres (1,115 ft) radius. This led to a much closer Casio Triangle (chicane), with the chicane becoming a "bus stop" type for motorcycles.

Problems continued for the revised section. During the 2003 MotoGP Grand Prix of Japan, the track's first major event since the revisions, MotoGP rider Daijiro Kato was killed when he crashed in the new section, on his way to the braking zone for the Casio Triangle. MotoGP has not returned to Suzuka since the incident.

Along with Fuji Speedway, Suzuka Circuit has been featured many video and arcade games. The circuit appears in most F1 games that have been published since 1987. The East Course was featured in NASCAR 98.

All content from Kiddle encyclopedia articles (including the article images and facts) can be freely used under Attribution-ShareAlike license, unless stated otherwise. Cite this article:
Suzuka Circuit Facts for Kids. Kiddle Encyclopedia.