Hockenheim is a German town in northwest Baden-Württemberg, about 20 km south of Mannheim. It is in the Upper Rhine valley on the tourist routes of the Baden Asparagus Route ("Badische Spargelstraße") and the Bertha Benz Memorial Route. The town is known for its motor racing circuit, the Hockenheimring.

Hockenheim is one of the six largest towns in the Rhein-Neckar-Kreis district. Since 1999, the population has exceeded the 20,000, and Hockenheim received the status of a regional central town ("Große Kreisstadt") in 2001.

Hockenheim is in the Upper Rhine valley. It is on an old trade route that ran from Frankfurt to Basel. The river Kraichbach flows through the town, and divides Hockenheim in an eastern and a western area. Hockenheim covers 34.84 km². About 28.2 percent is used for settlement and transportation. About 47.5 percent is used for agriculture. About 2.3 percent of the area are waterways, and 21.1 percent are forests.

The town is divided into two large natural areas. The "Rheinaue" to the west and the "Niederterrasse" to the east. The "Hockenheimer Rheinbogen" is an area of the Rhine. 656 hectares of the area is a nature conservation.

The central urban area forms one unit. It is divided into five districts for statistical reasons.

In 1984, an old brick kiln was found during an excavation in Hockenheim. The kiln had stamped bricks inside it from the Roman Empire. The Roman Legio XIV Gemina was near Mainz from 71 AD until 92 AD. The bricks indicate an early settlement in the Hockenheim area.

Hockenheim was first mentioned 769 as "Ochinheim" in a document of the Lorsch Codex (a list of early monastery gifts). The name "Hockenheim" was first used in official documents in 1238. During the Middle Ages, Hockenheim was owned by several local authorities. 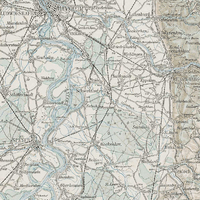 In the 17th century, Hockenheim was severely destroyed twice by French troops. In 1644 during the Thirty Years' War, and in 1674 during the Franco-Dutch War. Tobacco was brought to the area by the French. During this time, the growing of hops started to be replaced with tobacco. In 1803 Hockenheim was merged into Baden. The tobacco crop grew well and prospered, and Hockenheim was awarded town rights on 22 July 1895.

At the beginning of the 20th century, asparagus growing replaced most of the remaining hops growing. On 29 May 1932 the Hockenheimring opened with a motorcycle race. In January 1973, Hockenheim was assigned to the new Rhein-Neckar-Kreis (district).

The town is led by the Lord Mayor ("Oberbürgermeister"). The Lord Mayer is elected every 8 years by the population. This office has been held by Dieter Gummer (SPD) since 2004. The local council of Hockenheim consists of 22 members, and the Lord Mayor presiding the council.

Adopted in 1609, the coat of arms of Hockenheim has diagonally crossed silver hooks in a sign, below a crowned golden lion. The lion is the animal of the Electorate of the Palatinate, to which Hockenheim belonged; the hooks are probably derived from the place name. The form of the symbols was changed several times, but has been specified in its current form by municipal law since 1895.

The Hockenheimring, a motor racing course built in 1932. It has become on of the two home circuits of the Formula One German Grand Prix (the other is the Nürburgring). It has hosted this F1 event over 30 times since 1970. 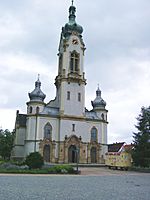 A museum for tobacco cultivation (growing) was founded in 1984. It was the first of its kind in Baden-Württemberg. The motorsport museum opened near the Hockenheimring in 1986 with over 200 historical motorcycles and engines. The "Gartenschaupark" was created in 1991 to host the State Horticultural Show. With an area of 16 ha, Hockenheim's largest park.

The town's water tower was built in 1910 in Art Nouveau. It is the landmark of the town. Other historic buildings include the Protestant town church, a 1906 Neo-baroque building by architect Hermann Behaghel, and the 1910 Catholic church, done in Art Nouveau with a high tower, by Johannes Schroth. The old Catholic church (1817), with a late Gothic choir tower in classical hall construction, serves as a community center today.

Hockenheim is twinned with:

All content from Kiddle encyclopedia articles (including the article images and facts) can be freely used under Attribution-ShareAlike license, unless stated otherwise. Cite this article:
Hockenheim Facts for Kids. Kiddle Encyclopedia.