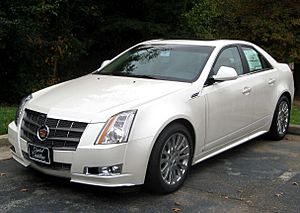 Cadillac CTS is a mid-size luxury vehicle that was manufactured by Cadillac. The car was available as a saloon or coupé. The vehicle was introduced in early 2002 as a 2003 model. It entered its second generation in late 2007 as a 2008 model, with the coupé versions being added later on. The third generation arrived in late 2013 as a 2014 model and was discontinued in 2019.

All content from Kiddle encyclopedia articles (including the article images and facts) can be freely used under Attribution-ShareAlike license, unless stated otherwise. Cite this article:
Cadillac CTS Facts for Kids. Kiddle Encyclopedia.