The North American International Auto Show (NAIAS) is an annual auto show held in Detroit, Michigan, U.S., at TCF Center. The show was held in January from 1989 to 2019. It was intended to move to the summer in 2020, but it has been suspended since due to the COVID-19 pandemic in the United States. It is among the largest auto shows in North America. UPI says the show is "regarded as the foremost venue for [car] manufacturers to unveil new products".

In 1899, William E. Metzger helped organize the Detroit Auto Show, only the second of its kind, after the 1898 Paris Auto Show. An auto show was held in Detroit in 1907 at Beller's Beer Garden at Riverside Park and since then annually except 1941–1953. During the show's first decades of existence it portrayed only a regional focus. In 1957 international carmakers exhibited for the first time.

Hosted in Detroit, Michigan, for over a century, since 1965, the show has been held at TCF Center (formerly Cobo Center), where it occupies nearly 1 million square feet (93,000 m2) of floor space. Prior to being held at the TCF Center, the show was held at other well known places in the Metro Detroit area, including the Light Guard Armory, Wayne Gardens pavilion, and Michigan State Fairgrounds.

Audi, BMW and Mercedes-Benz were not present at the 2019 edition, following recent absences of other luxury manufacturers like Porsche, Jaguar, Land Rover and Volvo.

In July 2018, plans were announced to move the show from January to June beginning in 2020, in hopes of attracting more visitors and adding outdoor events, with plans for an "auto plaza" around Woodward and Jefferson avenues, in addition to the indoor exhibition at TCF Center. On March 29, 2020, it was announced that the 2020 edition had been cancelled due to the COVID-19 pandemic, as TCF Center is to be used as a field hospital by FEMA.

In September 2020, plans were announced to move the 2021 show from June to late-September due to the continued pandemic. However, on January 11, 2021 it was announced that the 2021 edition had also been canceled. The NAIAS organizers will hold a shorter, alternate event known as Motor Bella at the M1 Concourse in Pontiac, Michigan, which will be an outdoor enthusiast event running from September 21–26. Executive director Rod Alberts stated that "we cannot ignore the major disruptions caused by the pandemic and the impact it has had on budgets. As such, we will be providing an amazing experience to the media, the auto industry and the public in a cost-effective way."

Two major awards are presented at the auto show: the EyesOn Design Awards for Design Excellence, and the Car, Truck, and Utility of the Year Award, which was founded in 1994. At the North American Car, Truck and Utility Vehicle of the Year awards, awarded in the preview period of the auto show, around 55 automotive journalists serve as judges. They evaluate "value, innovation, design, performance, safety, technology and driver satisfaction."

Car, Truck, and Utility of the Year Award

The 2019 show ran from January 19–27 at Cobo Center and opened with the lowering of a 2020 Shelby GT500 from the Cobo Center ceiling. 30 cars launched in the previews, down from 69 in 2018. Among various cars, it displayed new versions of the Kia Soul. Other major attractions included the 2020 Shelby GT500. USA Today noted that Chevrolet, Ford, Honda, Jeep and Toyota were all re-introducing discontinued models at the show with the media previews, for example the Toyota Supra and midsize Ford Ranger. Virtual reality displays were utilized by several carmakers. A number of protests took place outside the event regarding Ford's environmental record and GM layoffs.

At the show, Ford Motor Company and Volkswagen Group announced a global alliance to collaborate on commercial vans and mid-size pickup trucks, and potentially share EV and autonomous vehicle technology in the future.

The 2018 show took place January 20 to 28 at the Cobo Center. It ran from January 14 to 28. The press preview was extended by one day and the second edition of Automobili-D was extended by three days.

The 2017 show ran from January 9 to 22. Automobili-D, an exposition dedicated to automotive autonomy and mobility, ran in conjunction with the show on January 8–12. Sam Slaughter served as chairman.

The 2016 show ran from January 11 to 24. The show drew 5,068 credentialed members of the media from 60 countries during the media preview, with the industry preview afterwards drawing 39,788 visitors from 25 countries and 2,000 companies. Among celebrity visitors was Barack Obama. The first day saw the debut of models like the Lexus LC 500, the new Pacifica minivan, and an Audi hydrogen concept car. 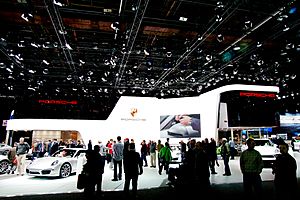 Porsche exhibit stand at the 2012 NAIAS

Nissan returned to the show after a three-year absence.

Bryan Herta was presented with the Baby Borg trophy for the 2011 Indianapolis 500 during the show, which coincided with the promotion of the return of the IZOD IndyCar Series to Detroit later in June. A replica Baby Borg was also presented to Suzie Wheldon, the widow of the winning driver of the race.

Porsche returned to the show for the first time since 2007. A new "Smarter Living in Michigan" section showcased alternative energy technologies outside of the automotive sector, in addition to an electric vehicle track condensed from its 2010 size.

A new "Electric Avenue" section showcased electric vehicles from around the world, including some entrants for the Automotive X-Prize. Saab, Hummer, Infiniti, Suzuki, and Porsche did not attend the 2010 show. Nissan and Mitsubishi did not have regular floor space, but the Nissan Leaf and Mitsubishi i MiEV appeared in the Electric Avenue section. A small electrical fire at the Audi exhibit caused an evacuation on January 21. Nobody was hurt.

Nissan, Infiniti, Mitsubishi, Suzuki, Rolls-Royce, Land Rover, Ferrari, and Porsche did not attend the 2009 auto show, the largest number of non-returning automakers in the show's history. As a result, the show became the first with Chinese automakers (BYD and Brilliance) exhibited on the main floor.

The 2010 Mercedes-Benz E-Class was announced and shown to invited members of the press, but was not put on public display until the March 2010 Geneva Motor Show.

The Detroit Auto Show was renamed the North American International Auto Show for 1989, as Lexus and Infiniti debuted. The show opened on January 11, with press previews and introductions for the first two days.

All content from Kiddle encyclopedia articles (including the article images and facts) can be freely used under Attribution-ShareAlike license, unless stated otherwise. Cite this article:
North American International Auto Show Facts for Kids. Kiddle Encyclopedia.