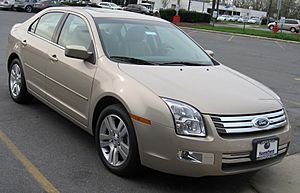 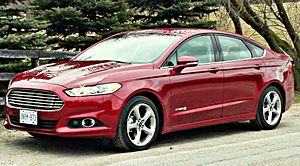 The American Ford Fusion is a car produced by Ford Motor Company since 2005 starting with the 2006 model year. It is sold in the Americas. The first generation model was produced from the 2006 to 2012 model years with a facelift in early 2009 as a 2010 model. The current second generation model launched in late 2012 as a 2013 model and was facelifted in Spring 2016 as a 2017 model. Ford is planning to discontinue the Fusion without a replacement due to more people buying Crossover vehicles and SUV's.

All content from Kiddle encyclopedia articles (including the article images and facts) can be freely used under Attribution-ShareAlike license, unless stated otherwise. Cite this article:
Ford Fusion (Americas) Facts for Kids. Kiddle Encyclopedia.