Del Valle ( del VAL-ee) is a suburb of Austin and part of the Austin–Round Rock–San Marcos Metropolitan Statistical Area.

It is an unincorporated area in southeastern Travis County, Texas, United States. It has no local government of its own and no official boundaries. But Austin has annexed portions, including the site of Austin-Bergstrom International Airport in 1990. After that, most recently in 2013, the city added more Del Valle territory to the east (8 to 13 miles southeast of downtown Austin).

In 1812 Santiago Del Valle settled in the hills of Central Texas in a piece of land given to him by the Spanish Government as a land grant. The community of Del Valle, established in the mid-1870s, was named after the land grant. In 1878 a post office opened. By the mid-1880s Del Valle, with 50 residents, also had three churches, two cotton gins, one general store, one steam gristmill, and one school. The primary crops shipped by farmers in the Del Valle area were cotton and grain. By 1900 Del Valle had 75 residents. About 150 people lived in Del Valle in 1927. The Great Depression hampered the community, which had 25 residents in the early 1930s. In 1942 the Del Valle Army Air Base opened (later renamed Bergstrom Air Force Base), leading to an increase in the area population. In the mid-1940s Del Valle had 125 residents. In the mid-1950s Del Valle had 200 residents. In 1907 the area common school district had two schools. Throughout much of its history Del Valle was served by the Colorado Common School District Number 36 and the Hornsby-Dunlap Common School District. In April 1963 the school district was renamed Del Valle Independent #910. From the early 1970s to the early 1990s, Del Valle's population estimates hovered around 300. The military base was closed in 1993, to be re-opened as Austin–Bergstrom International Airport in 1999 which brought growth to Del Valle and Southeast Austin.

Austin–Bergstrom International Airport or ABIA (IATA: AUS, ICAO: KAUS, FAA LID: AUS, formerly BSM) is a Class C international airport located in Austin, Texas, United States (the capital of Texas), and serving the Greater Austin metropolitan area, the 34th-largest metropolitan area in the United States. Located about 5 miles (8 km) southeast of Downtown Austin, it covers 4,242 acres (1,717 ha) and has two runways and three helipads. It is on the site of what was Bergstrom Air Force Base. The airport and Air Force base were named after Captain John August Earl Bergstrom, an officer who served with the 19th Bombardment Group.The airport replaced Robert Mueller Municipal Airport as Austin's main airport. 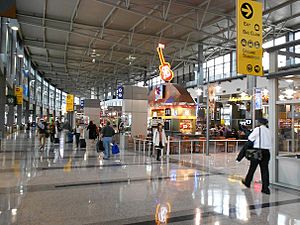 Circuit of the Americas

Circuit of the Americas (COTA) is a unidirectional, grade 1 FIA specification 3.427-mile (5.515 km) motor racing facility located in Elroy, on the southeastern periphery of Austin city limits, in Central Texas. COTA plays host to the Formula One United States Grand Prix. The circuit also hosts the Motorcycle Grand Prix of The Americas, a round of the Road Racing World Championship, commonly known as MotoGP, the FIA World Endurance Championship, as well as the WeatherTech SportsCar Championship. It previously hosted the Australian V8 Supercars series, the American Le Mans Series, and the Rolex Sports Car Series in 2013. 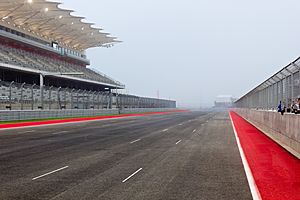 Circuit of the Americas

The Austin360 Amphitheater, winner of Pollstar’s “Best New Major Concert Venue” award for 2013, is an open-air amphitheater situated within Circuit of The Americas’ 1,500-acre sports and entertainment complex and has room for up to 14,000 guests. 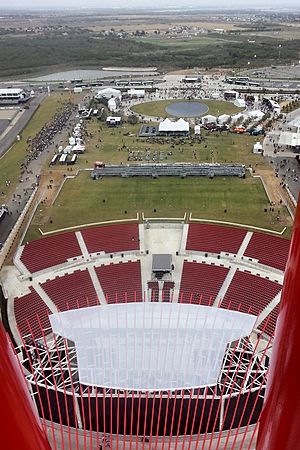 All content from Kiddle encyclopedia articles (including the article images and facts) can be freely used under Attribution-ShareAlike license, unless stated otherwise. Cite this article:
Del Valle, Texas Facts for Kids. Kiddle Encyclopedia.