Kids Encyclopedia Facts
This article is about the racing series. For its sanctioning body, see Indy Racing League.

The Verizon IndyCar Series is the premier level of American open wheel racing. The current series was founded by Indianapolis Motor Speedway owner Tony George. It began in 1996 as a competitor to CART known as the Indy Racing League (IRL). In 2008, the IndyCar Series merged with the Champ Car World Series (formerly CART). The series continues to be sanctioned by the Indy Racing League, which has taken the name IndyCar.

The league went back to the Indy Racing League name for the 2002 season. The IndyCar Series name was adopted in 2003. For the 2008 season, DirecTV served as a presenting sponsor, and the series was briefly advertised as the IndyCar Series in DIRECTV HD.

IZOD was announced as the series title sponsor beginning on November 5, 2009. The contrace runs for at least 5 years. In 2014, Verizon replaced IZOD as the series sponsor.

The IndyCar Series is not an open formula, where teams build their own cars. Chassis and engine manufacturers provided products only to the league in three-year cycles. Currently, Dallara provides the chassis to all teams and Honda is the sole engine supplier. The series basically a one-make or spec series.

In the series' first season in 1996 used older CART chassis. Any chassis built by Lola and Reynard from 1992 to 1995 could be used. The current Indycar started in 1997. Tony George defined rules for less expensive cars and production-based engines. This outlawed the CART chassis and turbocharged engines. These had been the type of race car used at the Indianapolis 500 since the late 1960s. 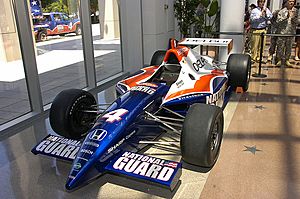 A 1997-spec G-Force IRL car. This car was repainted for promotional purposes in 2008 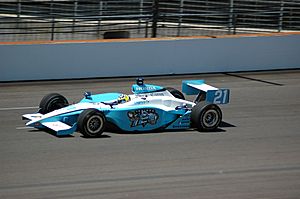 A Panoz GF09 driven at Indianapolis by Jaques Lazier in 2007

From the outside, IndyCars resemble those of other open-wheeled formula racing cars. They have front and rear wings and large air intakes.

At its inception, the IRL used methanol racing fuel. Methanol has been the standard choice in American open wheel racing since a fiery crash at the 1964 Indianapolis 500. Methanol provided a safer alternative to gasoline. It does not start burning as quickly as gasoline. A methanol fire can be put out with water. A methanol fire cannot be seen in daylight, which is a problem. Material was added to the fuel so it would burn with a color.

For the 2006 season, the fuel was a 90%/10% mixture of methanol and ethanol. Starting in 2007, the league advertised using 100% Fuel Grade Ethanol. The mixture was actually 98% ethanol and 2% gasoline. The additives satisfied the U.S. government's requirement that the alcohol be unfit for human consumption. It also adds a visible color in case of a fire.

For the 1996 season, the old CART specification engines were used. They were also used for the first two races of the 1996-97 season. They were V8 engines with 45 inches of turbocharger boost. The Menard-Buick V6 engine was used in 1996 with 55 inches of boost was also used.

Ford-Cosworth provided support to teams running their older-spec engines. The Ilmor Mercedes V8 engine, was allowed. It was only used once at the 1996 Indy 500. 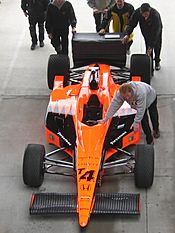 Starting in 1997, IRL cars were powered by 4.0 L V8, methanol burning engines. They were production-based and normally-aspirated engines. They were produced by Oldsmobile under the Aurora label, and Nissan under the Infiniti label. They produced around 700 horsepower. The engine rules changed in 2000. The displacement was dropped from 4.0L to 3.5L. The block no longer needed to be production-based. In 2004, the displacement was further reduced to 3.0L to curb top speeds.

When General Motors' ended the Oldsmobile name, the engine label was changed to Chevrolet starting with the 2002 season. In August 2003, Chevrolet announced its "Gen IV" motor, a rebadged Cosworth motor for competition. At the time, Cosworth was owned by Ford. On November 4, 2004, Chevrolet stated that it would be ending its IRL engine program at the end of the 2005 season.

In 2003, Toyota came to the IRL. In November 2005, Toyota company officials announced the company's withdrawal from American open-wheel racing and the immediate discontinuation of its IRL program. This was the same time they entered into NASCAR's Craftsman Truck Series.

Honda also came to the IRL in 2003. By 2005 was clearly the dominant engine manufacturer. Starting in 2006, they became the only engine manufacturer in the IndyCar Series, and will continue in that capacity until 2010. The Honda engine is designed and produced by Ilmor Engineering, which is part owned by Roger Penske. 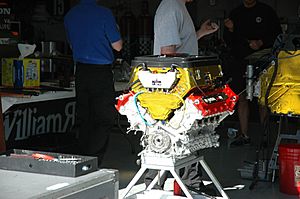 IndyCar Series engines are rev-limited to 10,300 Revolutions per minute (rpm) and produce approximately 650 hp. The valve train is a dual overhead camshaft configuration with four valves per cylinder. The crankshaft is made of alloy steel, with five main bearing caps. The pistons are forged aluminum alloy, while the connecting rods are machined alloy steel. The electronic engine management system is supplied by Motorola, firing a Capacitor discharge ignition (CDI) ignition system. The engine lubrication is a dry sump type, cooled by a single water pump.

Following the merger of CART/Champ Car into the Indy Racing League in 2008, the IRL acquired all intellectual property and historic records.

*1996: Scott Sharp and Buzz Calkins were tied in the final standings, and were declared co-champions. Calkins had one win, as opposed to Sharp being winless, but no tiebreakers were in place.
**2006: Sam Hornish, Jr. and Dan Wheldon tied in the final standings for first place. Hornish clinched the championship based on a tiebreaker of most victories during the season.
***2008: Although no report was officially released about it in 2008, IndyCar.com confirmed in 2009 that Danica Patrick being named Most Popular Driver was her "fifth consecutive" win of the award.

All content from Kiddle encyclopedia articles (including the article images and facts) can be freely used under Attribution-ShareAlike license, unless stated otherwise. Cite this article:
IndyCar Series Facts for Kids. Kiddle Encyclopedia.